So you’ve heard all about the Thai lottery but never knew how it worked? Here’s your definitive guide to the Thai government lottery, what the major prizes are, and how to claim them. 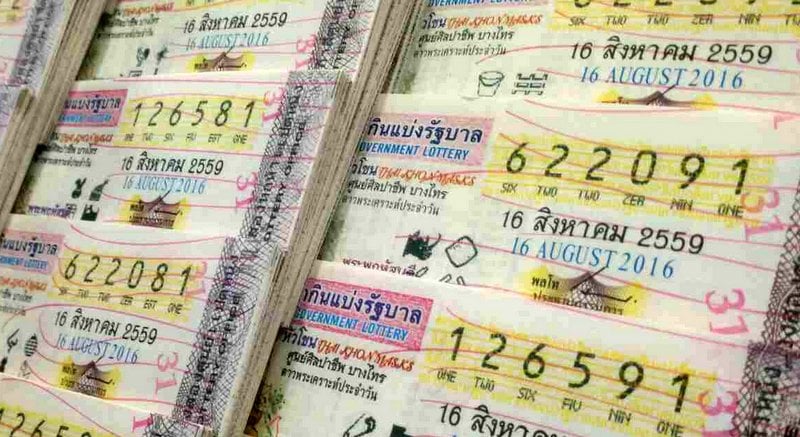 Twice a month, one of a million numbers could be your lucky one. Photo: Tanyaluk Sakoot.

I am an expat living in Phuket and wondering what is the deal with the Thai lottery. Can you explain to me the rules for Thai lottery? Can anyone buy a lottery ticket, including foreigners? Where can I buy a ticket and who is allowed to sell them. Do I need prove if I win, and where do I claim my prize?

It was reported last year that GLO scrapped jackpot prizes for getting right not only six digits but also two additional ones. This bonus prize could bring a lucky person some B20-30 million instead of B4-6 million. Have these prizes really been cancelled?

Any person, Thai or foreign, of at least 20 years of age can play and win prizes in the Thai government lottery.

The last one ended last year, and so far we have not had another one this year. When the Ministry of Finance orders us to hold another one, we will make a public announcement.

For the Thai Government Lottery, there are two draws each month, with the results announced on the 1st and 16th of every month. Prizes must be claimed within two years of the draw

Only Thais registered with the GLO are permitted to sell lottery tickets. All vendors must be at least 20 years old.

There are nearly 35,000 registered lottery vendors in the country, with more than 15,000 in Bangkok and more than 19,000 in the provinces. A list of all the registered ticket vendors is posted on the GLO website (click here).

Details of the registered vendors by province can be found at http://echannel.glo.or.th.

We are now working on posting all details of all vendors in Thailand, including where each vendor sells their tickets, on our website. Please check website for when that becomes available.

Any person can actually sell the tickets on behalf of a registered vendor, but usually registered vendors issue their subvendors with copies of the official ID card to allow them to sell lottery tickets.

If you have a doubts or feel comfortable buying a ticket from a particular vendor, you can always choose another vendor or check the tickets they are selling very carefully to make sure they are genuine.

A point to note is that as vendors technically buy the tickets from us, vendors can claim any prizes for unsold tickets that have winning numbers that they bought from us.

Each lottery ticket features a six-digit number. To deter people from printing counterfeit lottery tickets, the tickets are printed on special yellow, thin, smooth paper and feature a two-tone watermark of a mythical bird called a Wayupak in Thai.

Also, there are two types of silk thread in the paper. One can be seen with the naked eye, the other can be seen only under ultra-violet light.

Further, the paper is coated with chemicals. To test the paper, drops of bleach will show stains. Without the special chemicals, the paper will not show any blots or stains.

Please note that the main image printed in normal ink changes for each lottery draw. For example, lottery tickets for the August 16 draw feature an image of Phra Pharuehatsabodi to celebrate Thai ‘Khon’ masks as used in the Phi Ta Khon Festival held in Loei province every year.

Please check our website to see what the images are for the next upcoming lottery draws to make sure the tickets you buy are genuine.

Lottery tickets are sold in “pairs”, and cost B80 per pair. The price is set by law, so please report any vendors charging more than this by calling us at 02-3451466 or contacting us through our website complaint form via our website www.glo.or.th.

PRIZES TO BE WON

We print tickets for a million numbers for each lottery. Most times we print five “pairs” of each number, but sometimes we print six “pairs” to increase the chance of winning bigger prizes.

The reason why tickets are sold in pairs is so that the winner can “detach” one half of the pair and share it as a prize with another person.

First prize is B3 million per ticket stub, hence with one “pair” you will win B6 million. The more “pairs” you buy, the greater the prize you will win. The same applies for all prizes to be won.

There are separate draws for other major prizes, as follows:

There are also the special prizes, as follows:

There are also smaller prizes as follows:

There used to be “jackpot” prizes, also called “First Prize Bonus” prizes of B30 million and B22 million, but these prizes are no longer offered.

HOW TO CLAIM YOUR PRIZE

Any prizes of B20,000 or less can be claimed in cash from the vendor who sold you the winning ticket. Any prizes over B20,000 must be claimed in person at the GLO head office at 359 Nonthaburi Rd, Tambon Tha Sai, Muang District, Nonthaburi, where you will receive a cheque for your winnings. This cannot be done in Phuket, as there is no GLO office there.

Our office is open from 8:30am to 3pm (open during lunch), Monday through Friday (closed on public holidays).

The stamp duty is payable on all winnings, including for prizes of B20,000 or less paid in cash by vendors, who are required to collect – and pay – the stamp duty on the winners’ behalf.

For full details on how to claim your prize call the Department of Prize Payment at 02-5289621 or visit www.glo.or.th. If you win a major prize, it is strongly recommended that you report your winning tickets to the nearest police station as soon as possible to prevent any thieves from falsely claiming your prize.

The area in Patong around Rat-U-Thit Rd is very unhealthy for foreign tourists to stay. Monthly aver...(Read More)