On Campus: The courage to lead

On Campus: The courage to lead

Lead by example. Yes, it’s cliché, but that’s exactly how Matcha Phorn-in became a leader in her rainbow family and the indigenous communities in Chiang Mai and nearby provinces. Matcha is a Lao-Isaan ethnic minority lesbian feminist human rights defender. Because of her race, gender identity and sexual orientation, she experienced various systemic discrimination from a young age. 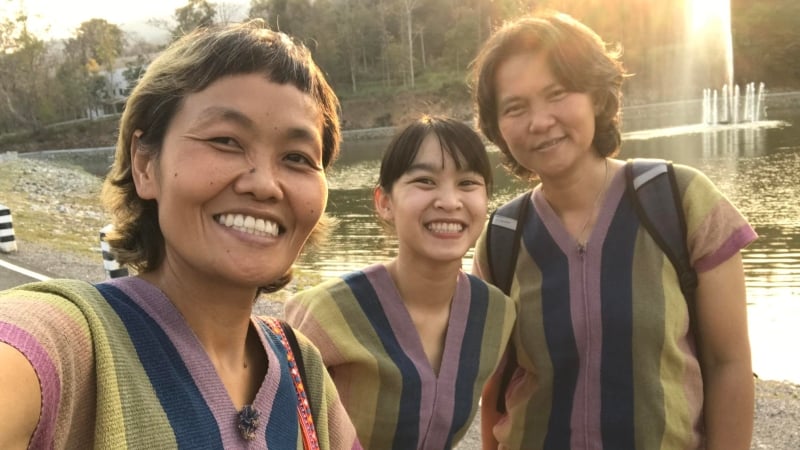 Matcha is the Director and Founder of Sangsan Anakot Yawachon Development Project (Building the Future of Youth), an organisation she founded 15 years ago, working with marginalised ethnic minority and indigenous women, girls, and young LGBTIQ ‒ many of whom are stateless. Sangsan provides a safe space for the people who are often overlooked and suffer institutional oppression in a form of limited access to opportunities and resources such as education, employment, healthcare, safety, nationality, and land rights. The organisation is committed to advancing women’s rights, working towards a SOGIESC (sexual orientation, gender identity and expression and sex characteristics) inclusive community, and advocating for social equality and equity through education, capacity building and life skills training.

During its first 10 years, Sangsan provided scholarships to more than 1,000 stateless children, 60 of whom have successfully completed a degree higher than high school. These students returned home and in turn became change-makers in their communities. Unfortunately, the scholarship programme was discontinued five years ago due to lack of financial support.

Intersectionality seems to be a double-edged sword for Sangsan. Funding opportunities have been difficult to come by because the organisation doesn’t quite fit into one specific category to receive funding from the government, non-governmental organisations (NGOs) or the United Nations (UN). Though COVID-19 exacerbated the organisation’s financial difficulties, Sangsan was able to hand out emergency relief packages 13 times in the span of two years, thanks to the donations collected from various civil society organisations (CSOs) and individual donors during the fundraising campaigns.

“The most important people who inspired me are those who are fighting for human rights,” reflects Matcha. One of these people is Nong Air, a scholarship recipient who was previously stateless. Sangsan has worked with her for more than 11 years and she was eventually granted Thai citizenship three years ago. “She never gave up the fight for her rights, so I could not give up either,” adds Matcha. Nong Air is currently working as one of the three staff at Sangsan, alongside Matcha and her partner.

Her daughter Siriwan also suffered discrimination and bullying because she is raised in a rainbow family. During Family Equality Day, at the age of 14, she wrote a story about her experience as a child growing up. In 2020, the 18-year-old Siriwan was selected as the Asian Girls Ambassador Human Rights award winner by The Garden of Hope Foundation for her advocacy on the rights of children of LGBTIQ families. In 2021, she collaborated with the Thai Health Promotion Foundation in publishing “This House has Gender Diversity”, a manual for parents with LGBTIQ children.

Now Nong Air, Siriwan, and another Sangsan youth volunteer are spearheading the Indigenous Youth for Sustainable Development (IY4SD), an economic empowerment project to enhance the quality of life of women and reduce poverty in the community. In 2020, the Youth Co:Lab/UNDP Thailand awarded them B100,000 for their Karen Rainbow Textile Social Enterprise Project. The project aims to revitalise the local wisdom and preserve the traditional weaving culture in Mae Hong Son Province. The traditional rainbow-coloured woven clothes were handmade by the indigenous Karen women of Ban Mae Sam Laep.

Matcha is extremely dedicated to what she does with Sangsan. Her unwavering voice is filled with conviction, compassion and positivity. Despite all the challenges she faces, she remains persistent and optimistic ‒ the epitome of leading by example. She is true to form.

NOTE: The views and opinions expressed in this article are those of the author and do not necessarily reflect those of PSU Phuket and its employees or official policies of PSU Phuket.

This article was featured in ’The Phuket Collegiate Magazine’, the university magazine published by Milla Budiarto at PSU Phuket. For more information, visit: https://www.phuket.psu.ac.th/en/magazine or to share ideas with Milla email: magazine@phuket.psu.ac.th