PHUKET: Local officials have launched yet another road safety campaign, this one called ‘Safe crosswalks, good discipline’ and is coupled with a campaign to encourage people to observe “100%” helmet use. 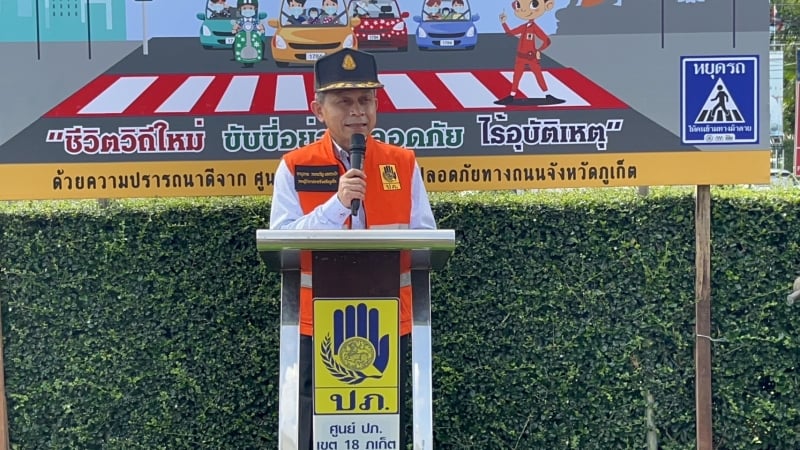 As part of the campaign launch, helmets were handed out to local members of the community, and students, and the finishing touches of paint were applied to a pedestrian crossing across Chao Fa West Rd in Wichit, in front of Dibuk Hospital.

The campaign is being organised by the Phuket Provincial office of the Department of Disaster Prevention and Mitigation (DDPM-Phuket), and the launch event yesterday was presided over by Phuket Vice Governor Anupap Rodkwan Yodrabam.

Joining the event to present a united front for the campaign were heads of local government agencies and senior-ranking police officers on the island.

DDPM-Phuket Deputy Chief Pornthep Prekham explained that the campaign is a nationwide effort by the DDPM head office in Bangkok, which together with the Road Safety Administration Center is coordinating identical activities in every province throughout the country

Provincial DDPM offices are to carry out their campaign efforts in their respective provinces, he said.

Mr Pornthep noted that the campaign is aimed at “all government agencies, educational institutions, medical institutions and local administrative organisations as well as child development centres and industrial estates” enforcing the ‘helmet use’ law.

He also warned that the use technology was to be used in enforcing the ‘helmet use’ law, which requires people to wear a helmet while operating a motorbike and even when riding as a passenger on a motorbike.

“These are ‘100% helmet-wearing areas’, and technology will be used to support rigorous law enforcement against those who do not wear helmets while driving,” he said.

“The campaign aims to have all government officials, employees, officers from all departments, organisation leaders and community leaders act as role models for observing traffic rules, especially wearing a helmet every time you drive a motorcycle,” he said.

Officials are to ramp up public relations campaigns to inform people that the requirement will be enforced, he added.

Results of the campaign will be reported each month to the Provincial Road Safety Administration Center, Mr Pornthep said.

Vice Governor Anupap highlighted the “loss of life and property” resulting from road accidents in Phuket.

“In particular, by people driving without discipline and not obeying traffic rules, and a lack of consciousness and awareness of the loss and the large number of deaths and injuries,” he said.

“Most of the accidents are caused by driving behaviour and from motorbikes hitting pedestrians crossing the road, causing deaths at  crossings,” he added.

“Today’s campaign to raise awareness of ‘Safe crosswalks, good discipline’ and wearing a helmet 100% will inspire drivers to realise and focus, and especially to slow down at crosswalks in community areas, near educational institutions and medical institutions or where traffic is congested in order to reduce losses that may occur from undisciplined driving and non-compliance with traffic rules,” he continued.

“We ask all sectors [of the community] to join together to drive the campaign to raise awareness,” Vice Governor Anupap said.