PHUKET: Phuket wildlife officials will not check on a ‘worryingly thin’ tiger being held at Phuket Zoo until tomorrow (Apr 17), despite police at the Natural Resources and Environmental Crime Division in Bangkok reporting complaints about the condition of the tiger to local wildlife officials yesterday. 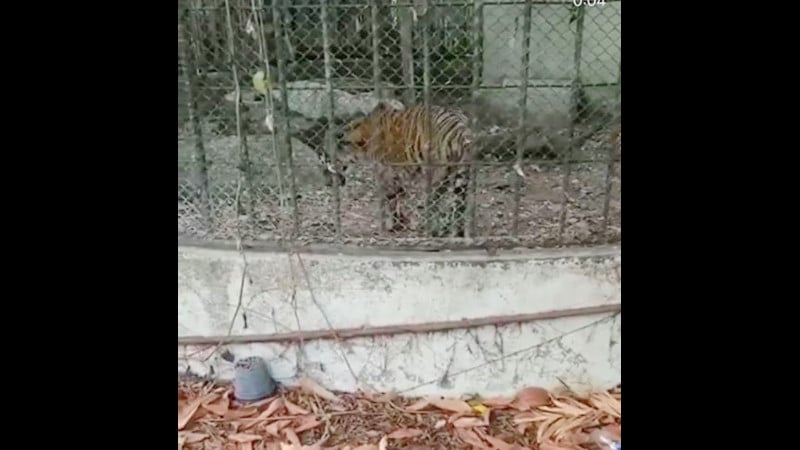 Wildlife officials say they are concerned about the condition of the ‘worryingly thin’ tiger, but will not inspect Phuket Zoo until tomorrow (Apr 17). Photo: Supplied via DNP

The news comes as local wildlife officials also confirm that Phuket Zoo will file a formal request to close the tourist attraction, possibly only temporarily, blaming the economic situation caused by the COVID-19 fallout for the zoo’s inability to keep operating.

Piyawat Sukon, Chief of the Khao Phra Thaew Non-Hunting Area Conservation Centre in Thalang, confirmed to The Phuket News yesterday (Apr 15) that he already knew about the tiger from posts on social media.

The issue of the tiger’s condition was also raised at a meeting of the 5th Area Office of the Department of National Parks, Wildlife and Plant Conservation (DNP) yesterday morning, Mr Piyawat said.

“In the photo [posted online], the tiger looks thin, but we need to check why it looks thin,” Mr Piyawat said.

“I know from experts that they [tigers] must not be too fat, but this tiger looks so thin. I am worried about the tiger and other animals while the zoo is closing,” he added.

Asked why his team were not able to check on the tiger earlier, Mr Pyawat said, “Going to check on the wild animals at Phuket Zoo is my job in normal circumstances, but I can’t go today [yesterday, Apr 15] because it is closed under the order issued by Phuket Governor Phakaphong Tavipatana on Mar 28 to close all zoos and other places where all kinds of animal shows are shown on the island.

Mr Piyawat did not explain what he meant by “relevant officials”, as he is the leading official responsible for the welfare of all wildlife animals on the island.

Asked who is caring for the animals while the zoo is closed, Mr Piyawat said, “The workers are feeding them.”

However, Mr Piyawat did not explain how he knew this or why his officials were unable to gain access to inspect the animals at the zoo if staff were still at the zoo feeding the animals.

Songchai Tongboonyang of the DNP’s 5th Area Office confirmed to The Phuket News that police at the Natural Resources and Environmental Crime Division in Bangkok had passed on complaints they had received about the tiger’s condition to his office yesterday.

“The complaints claim that this tiger has been abandoned. If true, then that is animal cruelty,” Mr Songchai said.

“Next, we will go to Phuket Zoo to investigate this complaint. We will arrive at Phuket Zoo this Friday (Apr 17) with relevant officials.

“We can’t go today [yesterday, Apr 15] because the relevant officials are not ready, and Phuket Zoo has been ordered closed by an order issued by the Phuket Governor. Phuket Zoo is locked so that we must wait for the zoo owner to open it,” Mr Songchai said, repeating nearly word for word Mr Piyawat’s explanation.

Officers will check on the welfare of other animals at the zoo during the inspection tomorrow, he added.

Mr Songchai also confirmed that his office had been informed of Phuket Zoo’s intention to file for closure, citing the economic fallout from the COVID-19 situation as its reason for closing.

“I just know that the Phuket Zoo owner will not continue to run Phuket Zoo and that the owner will ask to have the permit to operate a zoo cancelled because Phuket Zoo has been affected by [the] COVID-19 [situation].

“But we have yet to receive the formal request. We are waiting to receive it,” he added.

Mr Piyawat also confirmed that he had also been told of the zoo’s intention to shut down.

However, he explained that unless the zoo was ordered closed by wildlife officials and its permit revoked by force, the owner of Phuket Zoo is legally able to reopen another zoo at a later date.

Channeling drivers into 1 lane 'checkpoints' as a method of enforcing road rules is absolut...(Read More)

Seems Government didn't learn from the 2013 experience. No measures were developed/invented to p...(Read More)

Besides that according Governor the average income of people of Phuket has fallen to 1900thb monthly...(Read More)

A holiday to Thailand with a young family has a enormous negative emotional impact due to continues ...(Read More)

Why oh why is commercial fishing allowed on a prized reef? Is it any wonder I didn't see a leopa...(Read More)

Someone uses a gun to kill an animal and as long as the body is returned -no police report? That...(Read More)

Feels a lot like Deja Vu. We were cutting fishing nets off reefs 20+ years ago so nothing has change...(Read More)

"Phuket people have suffered a lot", said Governor. Wow, he knows it! Now, why 'Test&...(Read More)

Navy rallies to remove fishing nets? Navy should rally in a anticipating way in this matter. Forbid...(Read More)

All I wanted is to enjoy a holiday with my young family. Not the draconian measures for a disease wi...(Read More)