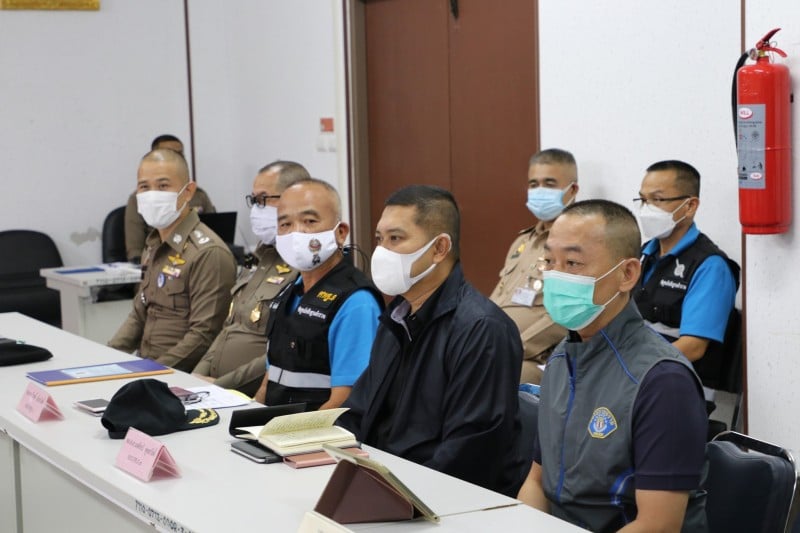 Despite admitting that police had yet to receive the initial autopsy results, Gen Suwat said that police believe that Ms Sauvain-Weisskopf was murdered.

Forensic police brought from Bangkok to assist local officers had inspected the scene, near the Ao Yon Waterfall on Phuket’s east coast, and believe Ms Sauvain-Weisskopf was killed where her body was found, Gen Suwat told a press conference held at Wichit Police Station yesterday afternoon.

Gen Suwat was in Phuket yesterday to inspect the scene in person, and to oversee the initial investigation into Ms Sauvain-Weisskopf’s death.

An entire team of officers from the Crime Suppression Division (CSD), as well as expert forensic police, had been brought from Bangkok to assist with the investigation, he said.

Also among the investigators were local officers from Phuket Provincial Police, Region 8 Police, with support from Tourist Police and the Immigration Bureau, he said.

“By bringing down a large team, the investigation will be more thorough. We have quite a lot of work to do. We will open a work centre here at Wichit Police Station and work 24 hours a day until the perpetrators are caught,” Gen Suwat said.

It was explained at the meeting that Ms Sauvain-Weisskopf was travelling alone after arriving on July 13 through the Phuket Sandbox scheme.

She stayed at the Dusit Thani Laguna Phuket in Cherng Talay, on Phket’s west coast, and checked out on July 27 to travel to Krabi. Ms Sauvain-Weisskopf returned to Phuket on July 30 and stayed at The Mooring Resort at Ao Yon. She was scheduled to check out today (Aug 7).

On Tuesday (Aug 3), at 11:25am, Ms Sauvain-Weisskopf left the resort on foot to travel to Ao Yon Waterfall, which is about one kilometre away from the resort. She did not return.

It was not until 2pm on Thursday (Aug 5) that police were informed that a body, her body, had been found.

“We now believe that the incident was a murder, though we have to wait for the full autopsy to confirm the cause of death,” he said.

“As for whether the deceased was sexually assaulted, we will have to wait for the fully autopsy results, which will take some time,” he said.

Regardless, police were already looking for suspects, Gen Suwat noted.

“There are still no suspects. We have questioned all of the people who had access to the scene at that time. From the CCTV footage available, we saw that [Ms Sauvain-Weisskopf] had entered the scene alone, but we need to check other details, including individuals who may have entered the area from another entrance. A number of witnesses have been summoned for questioning,” he said.

Police have questioned migrant workers living in a camp in the area. However, he stressed that the move was only procedural.

“Police have no key suspects at this time,” he said.

“From the condition of the body, it is believed that the deceased entered the tourist attraction and was murdered at the scene. The corpse had marks on the body. As for whose shoes were found in the area, we still can’t answer,” Gen Suwat continued.

“As for the inappropriate photos of the deceased [that have circulated online], I would like to leave it with you not to publish the photos as they are sensitive,” he said.