PHUKET: Two Nigerian men have been arrested in Phuket for allegedly swindling a Thai woman out of over than B100,000 in a so-called “romance scam”, Phuket Immigration Police announced this morning (June 21). 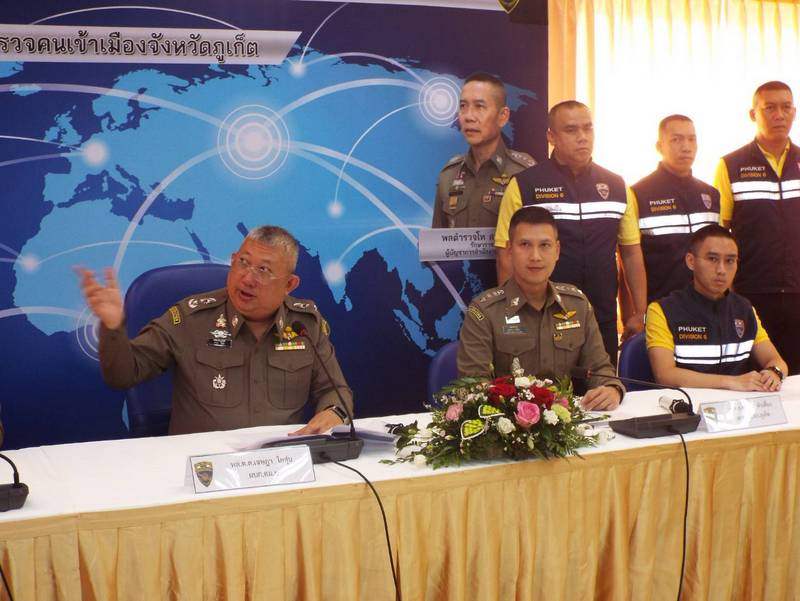 The scam duped the woman of an estimated B136,500, Col Kathathorn said. Photo: Eakkapop Thongtub

Col Kathathorn said that on June 9 the two men made contact with a woman in Suphan Buri Province through the mobile chat app LINE. The men had created a profile used the name Petpu Carol, and using a photo of a good-looking, middle-aged, fair skinned foreign man for the main profile image.

The men added several friends to the profile, and started chatting with the woman to gain her trust.

Through the app, the men promised the woman that they would send gifts from aboard to her.

Then someone called the woman by telephone, using the phone number 061-4540476. The person pretended to be staff from the Excel Transport International Co Ltd, a genuine logistics company based in Bangkok.

“They called the woman and informed her that a parcel had arrived from abroad for her, but that she had to pay B38,000 tax in order to receive it. Only then could they deliver the parcel to her,” Col Kathathorn explained.

“The woman transferred B38,000 to the account number given, Siam Commercial Bank account number 803-216143-0. Then the same person called her back, using the same phone, to explain to her that the contents of the parcel were of very high value, and that she had to pay B98,500 more in order to receive it,” he added.

“She then called back the number that had called her, but no one answered the phone. She tried cahtting with Petpu Carol on LINE, but the profile did not exist anymore,” he said.

“That’s when the woman realised that she had been scammed, and filed a complaint at Bang Pla Ma Police Station in Suphan Buri Province, in Central Thailand on June 14.

The police began their hunt to track down the perpetrators, leading them to an ATM at the Jungceylon shopping mall in Patong, where CCTV cameras recorded the men withdrawing money from an account created in the name of woman called Siriwan Chanapongma.

“We saw Okoro making a withdrawal from the ATM at 12:15am on June 15. Officers that same day went to The Villa on Nanai Rd, Patong, where they found Okoro and Ihegha checked in. In the room, the officers also found an ATM card and a bankbook for an account created in the name of Miss Siriwan.

“Police checked and found that about B502,000 had been transferred to that account from June 12-14. Officers also found many other unusual transactions,” Col Kathathorn added.

Among the “unusual” transactions were money transfers to an account in Cambodia, he noted.

Okoro and Ihegha were both charged with using an electronic card of another person wrongfully in a manner likely to cause detriment of the other person, and both were charged for overstaying in the country.

“We will investigate further to try to track down any other victims,” Col Kathathorn assured.

“If you find any foreign person acting suspiciously satying illegally in the country, please report it to the Immigration Bureau hotline 1178 or via the website www.immigration.go.th,” Col Kathathorn said.