BANGKOK: The Tourism Authority of Thailand (TAT) backs New Year countdowns and celebrations going ahead as planned as long as the government does not order any cancellations. 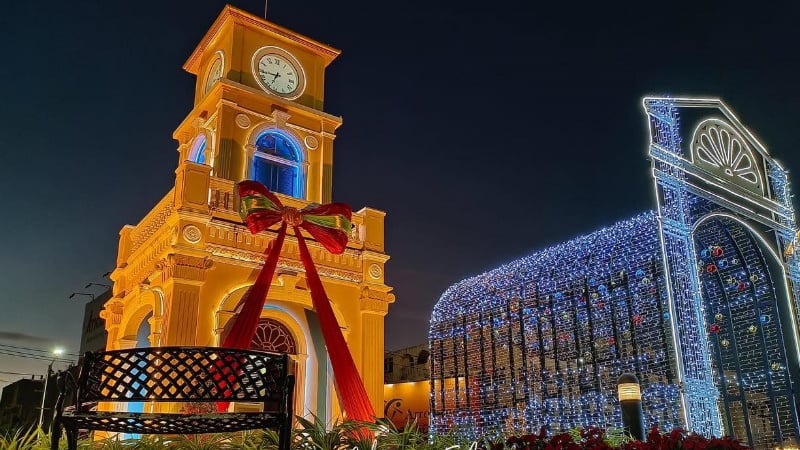 As of Christmas Eve morning (Dec 24) the island of Phuket still gears up for festivities. Photo: Netpirun Suksri via Phuket Info Center

TAT governor Yuthasak Supasorn said at the moment, the TAT has not yet received any warning that an order of this nature is forthcoming after a number of provinces decided to downgrade their countdown events this year, reported Bangkok Post in this Saturday’s (Dec 24) issue of the paper.

Neither the tourism minister nor Prime Minister Prayut Chan-o-cha had given any indication that events supported by private sector partnerships across 12 provinces were in jeopardy, he said.

Many operators had also requested permission to add an official blessing ceremony for Her Royal Highness Princess Bajrakitiyabha Narendiradebyavati in their events. The princess was admitted to King Chulalongkorn Memorial Hospital after losing consciousness due to a heart condition on the evening of Dec 14.

The TAT itself will host its own New Year countdowns in two locations – Bangkok and Hat Yai – which it hopes will serve as a thank you to those who have worked ceaselessly to boost tourism in the wake of the COVID-19 pandemic, said Mr Yuthasak.

"The Amazing Thailand Countdown 2023 has been arranged to promote Thai domestic tourism – the key driver of the economy," he said.

Bangkok’s event will be held at the pier beside Wat Phra Chetuphon (Wat Pho), with highlights including free concerts and fireworks with the music still set to go ahead as planned at the moment.

In Pattaya, the New Year countdown is still going ahead, but there will not be a fireworks extravaganza on the nights of Dec 29-31. Phuket authorities have not announced any changes to their New Year events.

The main Phuket Countdown 2023 event will be held at Saphan Hin, where festivities and live music will be held each night from Dec 28 - Jan 5. The Phuket Provincial Office, which is organising the event, promises that the fireworks display this year “are bigger than ever”.

The Phuket Provincial Administration Organisation (PPAO) will hold its own Phuket Countdown 2023 event at Surin Beach from Dec 29-31. The festivities will include hundreds of food stalls, along with a tattoo contest, a fancy balloon display, a “middle of the sea” light show and a “beautiful colours of Phuket” show.

Mr Yuthasak of TAT said Thailand would boast about 700,000–800,000 foreign tourists during the upcoming holiday week. Average arrivals of 72,000 inbound tourists per day in December could help drive spending in this period to B26 billion, he said.

Foreign arrivals to Phuket in December reached 230,707 people (as of Dec 22) giving the daily average of 10,486 visits. Top markets for December include: