New names on the Phuket Pairs Bowling honours board

New names on the Phuket Pairs Bowling honours board

BOWLS: In steaming hot weather on Monday (Mar 15) a full complement of 16 bowlers battled it out to become this year’s Phuket Pairs Bowls Champions. 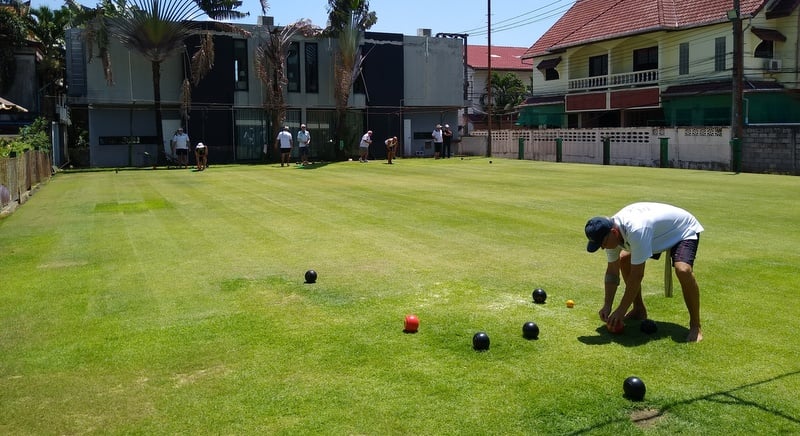 With partners drawn at random there were some clear favourites thrown together, although as witnessed previously form and expectations are often overturned and several of the so called underdogs were quite confident of causing an upset prior to the tournament.

The decision was taken to revert this year’s tournament back to a simple knockout format rather than the arduous and complicated “champions league” format of the past two years. The knockout format always has the potential to throw up a few shock results – put simply, lose and you’re out!

Surprisingly, the first round went to form with no shock results although former champion Ulf “Ue” Egerstaad and Ray Austin were taken to a last end decider against now occasional bowler Rob Knight and Duncan Kennedy.

It was in the semi-finals where two favourite pre-tournament pairings of Dot Barker and Glenn Collins and George Sasonow and Ron Blackwood perished, leaving Dot Glenn and Ron still searching for that elusive first “major” victory despite their sterling form on club days.

Progressing to the finals were Ulf and Ray “Rocket” Austin pitted against Pat Ailm and Noon Mslk. Only Ulf had ever won a “major” before so at least one new player would be getting their name on the honours board.

A close game was expected in the final but, after Pat and Noon took an early 5-1 lead, the expectations were that Ue’s previous championship experience would prove to be a crucial factor. In quite a few other championships, finals nerves had affected the challengers, particularly in Noon’s last final appearance.

Not this time though!

Noon had obviously conquered the nerves that affected her last time and, coupled with “Totally Ice Cool” Pat, the pairing comprehensively out bowled Ue and Ray with some stunning deliveries to streak to a well deserved 14-5 victory.

It was somewhat of an anti-climax for the watching crowd but there was nothing Ue and Ray could do about the top class standard of bowling by Noon and Pat who became the newest names on the honours board. Congratulations to Noon and Pat!

The “plate” final for first round losers turned out to be an absolute thriller worthy of any final.

Underdogs Duncan Kennedy and Rob Knight came through from one point behind on the last end to sneak it from Dean Lambert and Greg “Hollywood” Holman, both previous champions themselves, by a score of 8-7.

The next “major” competition is the very prestigious Phuket Singles Championship on April 5th.

Kamala Lawn Bowls Club is open Monday, Wednesday and Friday with all welcome for a 3pm start. Private parties and other groups are also welcome and all equipment is provided. For further details please contact the club on 0991307299 or 0948987476.