PHUKET: A new global consortium called the World Tourism Association for Culture and Heritage (WTACH) has been formed to protect local cultures, heritage and historical sites that are in peril from overtourism

tourismenvironmenteconomicsnatural-resourcespollution
By The Phuket News The photo from May 2016 that made the world understand what was happening at Maya Bay beach at Phi Phi Island. Photo: Dr Thon Thamrongnawasawat / Facebook Maya Bay in June last year after is was closed to protect the marine environment, which was under severe threat by overtourism. Photo: DNP 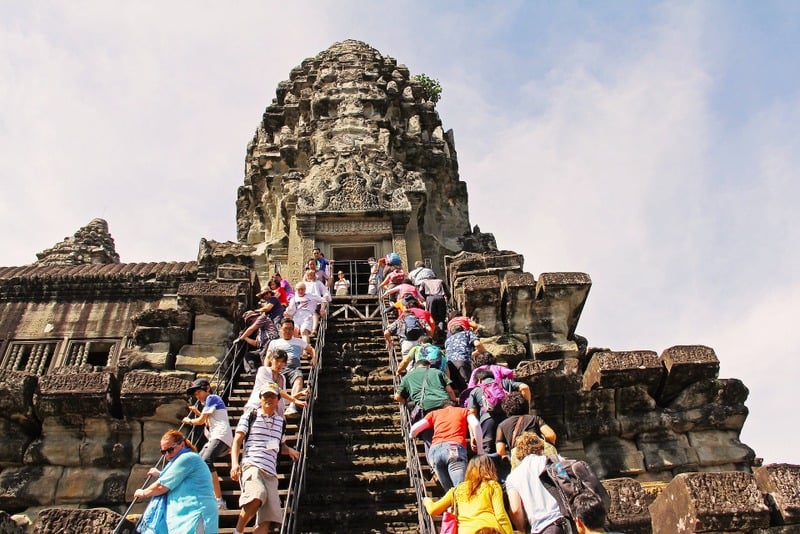 Tourists at an ancient temple in Sichuan, China. The new association will promote ethical practices and better management relating to culture and heritage destinations that are now buckling due to unrestricted visitor growth.

WTACH will also encourage the implementation of sustainable practices at locations that are still in a honeymoon phase of tourism development, said a release announcing the association’s formation. (See website here.)

To advance its agenda, WTACH has been launched with 15 specialist advisors from diverse backgrounds relating to the culture and heritage tourism sector. They will work with destinations that need help now or want to put plans in place before running into trouble.

WTACH is the brainchild of its founder and CEO, Chris Flynn, a former director for the Pacific region at the Pacific Asia Travel Association, a role he held for 15 years.

“WTACH works with destinations to provide development strategies and policy framework recommendations to avoid the kind of tourism meltdown we are seeing at Angkor Wat, Phi Phi Island and Mt Everest,” says Flynn.

WTACH’s position is that tourism needs to respect host communities and their cultural and heritage assets by adhering to a framework that has the host community at its heart.

“It’s time for the tourism industry to take step back and look at the long term impact of its decision making,” says Flynn.

Social media and mobile devices aren’t helping. Carolyn Childs, CEO of MyTravelResearch.com, and a member of the WTACH advisory specialising in analysing data and trends, says it is no coincidence that WTACH is being born at a time when ‘selfie’ culture and the promotion of ‘Instagramable’ travel is sweeping the world.

“A unique image can ‘create’ a destination in moments – often leaving it unprepared or wrong-footed,” says Childs.

“This is particularly true if the image runs counter to cultural values. It risks tourism losing its ‘social licence’ with host communities. Ironically, these ‘instadestinations’ risk destroying the very thing travellers are seeking,” she warns.

The desire for ‘authenticity’ in travel is also problematic. Childs cites an AirBnB survey which found that over 80% of millennial travellers (and 93% of Chinese millennials) seek a “unique” experience and want to “live like locals” while on holiday.

“The pressure on destinations and tour operators to find and monetise ‘unique’ and ‘authentic’ experiences will only increase as both millennial and mature travellers work through their ‘been there done that’ bucket lists,” she says.

“Having the right frameworks in place help communities and tourists. They build a more sustainable destination that delivers truly rewarding experiences,” she says.

On the supply side, WTACH believes that destinations should no longer make arrival numbers their holy grail.

The new association is deeply concerned that Turkey, for example, has decided to expand tourism arrivals from 40mn in 2018 to 70mn by 2023 – less than four years away.

“What interpretive and cultural safeguards have been put in place?” asks Flynn. “Have local communities been consulted? Is there an actual plan that involves a holistic government approach and key stakeholder and community engagement?”

“At WTACH we know there’s a better way. We are now seeking like-minded organisations and individuals to help us advance responsible tourism in culturally sensitive host communities,” he says.