Cows Jeremy Bootsy connects to bring up his 50 against the Cows during Thursday’s LMS early bird match at the ACG. Photo: Karnthida Vongsakul. 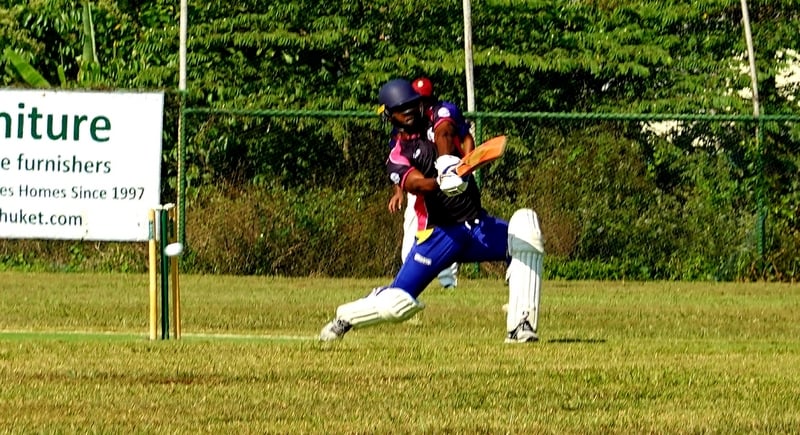 Sri Lankan former professional Ashan Fonseka lets fly at a wide delivery on his way to 42 not out playing fir Thalang Cows on Thursday morning at the ACG. Photo: Karnthida Vongsakul. Organized by the Phuket Cricket Group (PCG) to assist in raising funds for a new pitch mower, the early-bird fixture got underway just after 7:30am using the LMS format that includes several unique rule variations, such as double plays and allowing the last wicket to continue batting solo.

Having won the toss, it was no surprise that Cows skipper Mayur Deuskar elected to bowl first with the morning dew likely to play a major factor in the match.

Penguins openers, Justin Swart and Saju Abraham, made a terrific start with the hard, new ball aided by some wayward bowling and sloppy glove work from the Cows in gifting the batsman runs.

With the score on 71 in the 7th over, the match was to flip on its head as Abraham (34) skied one and was dismissed caught and bowled by Zan Coplestone. Despite warnings from interim chairman, Michael Flowers about the importance of paying attention to the LMS “double play” rule, Swart (34) found himself stranded at the keeper’s end after crossing on the catch. The fielding side eventually realized that they could run Swart out at the non-strikers end as Swart was required to ground his bat there to complete the delivery. The two batsman trundled off the ground together, cursing both themselves and the LMS rule.

The big-hitting Paddy Ledeboer was the next to go, bowled first ball by 12-year-old spin sensation, Coplestone leaving the Penguins with more than 10 overs to face against a ball becoming increasingly heavier from the overnight dew.

Curt Livermore (21) and captain Shivam Bhattacharya (21) battled through the latter stages of the match to post a mediocre score of 134/6 for the Penguins.

In reply, and with dry conditions in the second innings, Jeremy Bootsy (51 retired), Stuart Hamilton (35) and Ashan Fonseka (48 not out) guided the Cows to a comfortable seven wicket victory with more than five overs to spare.

The stand out bowling performance as well as the game’s MVP went to Cows player Coplestone with four overs (3-13). The action was finished within two hours, as players retired upstairs to the Tipsy Cow for breakfast, rounding off a pleasant morning.

Another similar type of match aimed at getting players more involved in play is scheduled for this coming Wednesday (Feb 3) evening at 4pm. Sign up on the PCG Facebook messenger group to play.