WORLD: Myanmar’s junta chief said yesterday (Aug 1) that elections would be held and a state of emergency lifted by August 2023, extending the military’s initial timeline given when it deposed Aung San Suu Kyi six months ago. 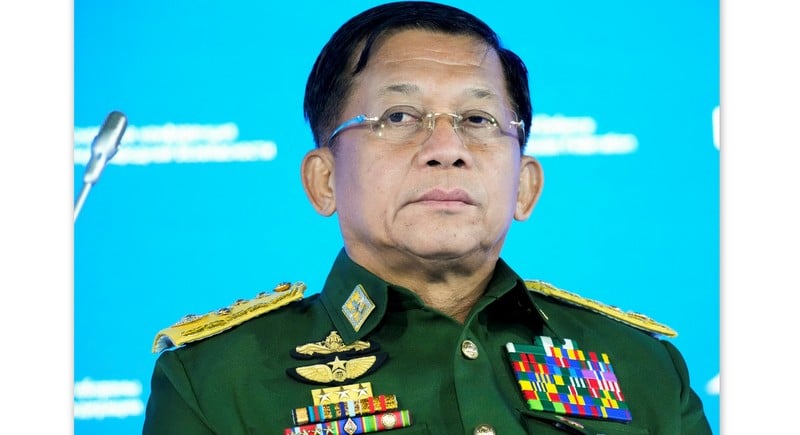 Junta leader Min Aung Hlaing said the military would “accomplish the provisions of the state of emergency by August 2023”. Photo: AFP

The country has been in turmoil since the army ousted the civilian leader in February, launching a crackdown on dissent that has killed more than 900 people according to a local monitoring group.

A resurgent coronavirus wave has also amplified havoc, with many hospitals empty of pro-democracy medical staff, and the World Bank has forecast the economy will contract by up to 18%.

In a televised address junta leader Min Aung Hlaing said the military would “accomplish the provisions of the state of emergency by August 2023”.

“I pledge to hold multi-party elections,” he added.

The general’s announcement would place Myanmar in the military’s grip for nearly two and a half years - instead of the initial one-year timeline the army announced days after the coup.

The State Administration Council - as the junta calls itself - announced in a separate statement that Min Aung Hlaing had been appointed prime minister of the “caretaker government”.

The army has justified its power grab by alleging massive fraud during 2020 elections won by Suu Kyi’s National League for Democracy (NLD) in a landslide.

Last week it cancelled the results of the polls, announcing it had uncovered more than 11 million instances of voter fraud.

Detained since February 1, Suu Kyi faces charges including flouting coronavirus restrictions and illegally importing walkie talkies - which could see her jailed for more than a decade.

International pressure, including sanctions targeting the military and army-linked businesses, has done little to knock the junta off course.

The 10-country Association of Southeast Asian Nations (ASEAN) has tried to negotiate with the regime - though critics say the bloc lacks diplomatic clout and unity.

ASEAN leaders in April called for an “immediate cessation of violence” and a visit to Myanmar by a regional special envoy, an agreement that Min Aung Hlaing later walked back.

Myanmar’s military has long had a close relationship with its Thai counterpart - which has a track record of being putsch-happy, staging more than a dozen coups in Thailand since 1932.

Across Myanmar yesterday small groups of demonstrators marched - from the southern coastal city of Dawei to jade-producing town Hpakant - to demand a return to democracy.

Protesters in the northern town of Kale held banners reading “strength for the revolution” while demonstrators set off flares at a march in the commercial capital Yangon.

But, six months since the generals ended a decade-long experiment with democracy, large-scale protests are no longer the norm due to violent crackdowns and mass arrests.

A deadly COVID-19 surge, which has left staff and volunteers working in crematoriums and cemeteries overwhelmed with bodies, is also limiting turnouts.

Pro-democracy medical workers - among the first to kick off a nationwide civil disobedience campaign joined by tens of thousands of government workers - now work underground to provide telemedicine consultations to the ill.

But the need is still great, with pleas for help resounding across social media, and residents waiting in long lines for oxygen tanks and medicine for virus-afflicted relatives.

“In the six months since the coup, the people of Myanmar have demonstrated remarkable courage and conviction in the face of widespread violence... and now a devastating public health crisis,” said the US embassy in Myanmar on its official Facebook page yesterday.

“The United States remains firmly committed to supporting the people of Myanmar in their aspirations for a democratic, inclusive future of their own choosing.”