Mother jumps into 30m well to save son

Mother jumps into 30m well to save son

PHUKET: Thai social media has been abuzz with posts praising a mother jumping into a well in Wichit that is reportedly 30 metres deep to rescue her 3-year-old son yesterday (Aug 4). Ms Da and her 3-year-old son Seo after their ordeal. Photo: Eakkapop Thongtub 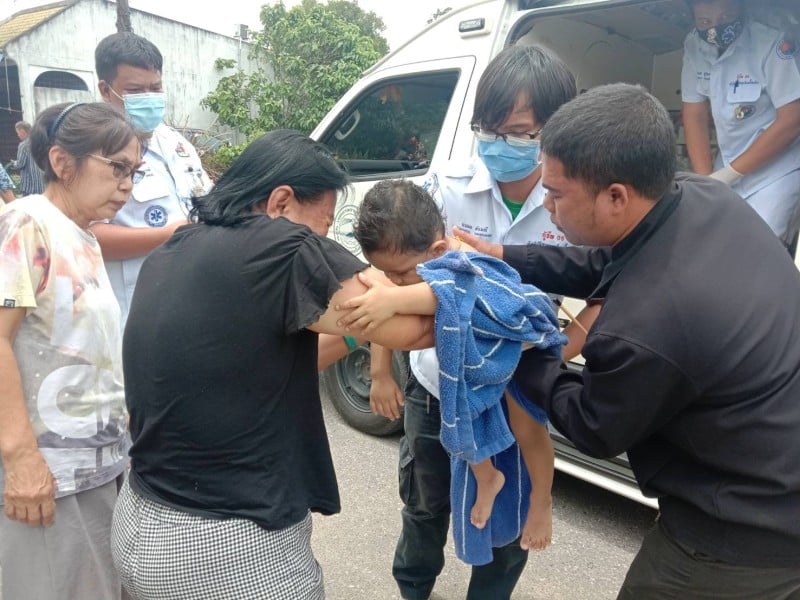 A rescue worker stands beside the well, now with a concrete lid sealing the top. The message on the wall says the well is 30 metres deep. Photo: Eakkapop Thongtub

Rescue workers from Wichit Municipality were called to the scene, behind a house in Soi Phaisan, Wichit, at 12:30pm after being told that a young boy had fallen into a well.

When rescue workers arrived, they found a neighbour providing first aid to the toddler, named ‘Seo’, with his soaking wet mother, named only as “Ms Da”, 43, standing by.

Both the boy and the mother were physically well, with no broken bones, but still in shock, one rescue worker said.

The boy was given oxygen to help calm his breathing, and both he and his mother were taken to Vachira Phuket Hospital in Phuket Town, the rescue worker added.

She called out to Seo, but heard no response, and started searching for him. Failing to find him inside the house, she searched outside and saw both his shoes beside the well.

Ms Da said she shouted out to her neighbours for help, then apparently “jumped” into the well, which according to a spray-painted message on a nearby wall is 30 metres deep, though one rescue worker seriously doubted that the well was actually that deep.

With the well only one-metre wide, it was not reported whether or not Ms Da landed her son at the bottom of the well, but she did say that he was unconscious when she reached him.

Ms Da said that she then held Seo over her shoulder, presumably to drain any water from his lungs, and he soon regained consciousness.

The neighbour then lowered a rope to lift Ms Da and Seo out of the well, she added.

The neighbour praised Ms Da for her “resolute heart” and jumping into the well to help her son, and gave her B1,000 to help Ms Da care for her son.