PHUKET: Police are hunting for a man who waved a handgun out of his car window at another driver on Thepkasattri Rd in Thalang at around 10am this morning (Mar 22). 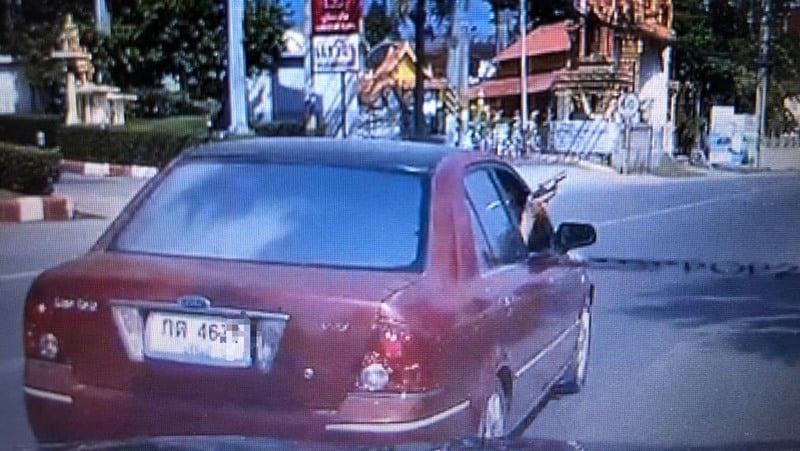 A screenshot from the video recording shows the driver of the maroon Ford sedan waving a gun outside his window. A screenshot from the video recording of the maroon Ford sedan overtaking before the driver waved a gun outside his window. A screenshot from the video recording of the maroon Ford sedan shows the driver waving a gun outside his window. A screenshot from the video recording shows the driver of the maroon Ford sedan waving a gun outside his window.

The driver who was on the receiving end of the threat was recording the incident with a camera attached to his car. The car recording the incident was driving in the middle lane near Wat Srisoonthorn on the west side of Thepkasattri Rd. The video shows a maroon Ford sedan overtake before cutting in front and moving to the left lane while flashing a gun outside the driver side window.

The video was posted online and spread fast.

Col Thirawat Leamsuwan of Thalang Police reported that he was aware of the incident and had already ordered officers to investigate.

CCTV footage is being analysed to track down the suspect, Col Thirawat said.

“We have ample evidence and a clear picture of the registration number of the car. The suspect should hand himself in to police as it will not be difficult to track him down.