FOOTBALL: Manchester United’s Premier League clash against Liverpool was postponed yesterday (May 2) after fans invaded the Old Trafford pitch as part of a protest against United’s owners, the Glazer family. 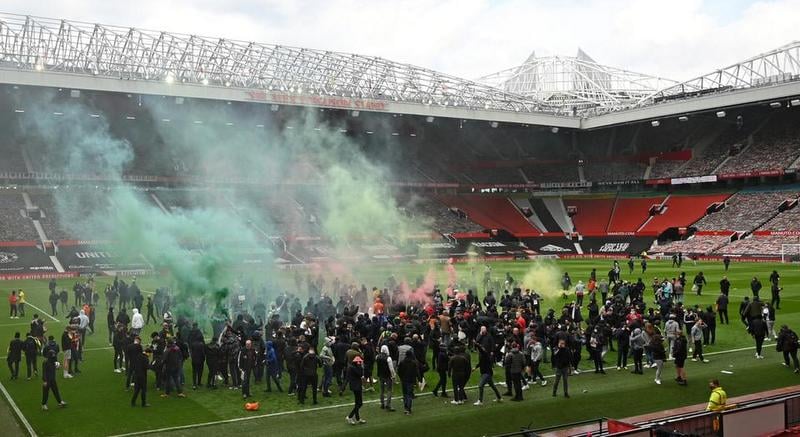 Hundreds of fans managed to make their way into the ground, chanting “we want Glazers out.”

Large numbers of supporters had also gathered outside the stadium and there were clashes with police as they moved in to disperse the crowd.

“Following discussion between the police, the Premier League, Trafford Council and the clubs, our match against Liverpool has been postponed due to safety and security considerations around the protest today,” United said in a statement.

“Our fans are passionate about Manchester United and we completely acknowledge the right to free expression and peaceful protest.

“However, we regret the disruption to the team and actions which put other fans, staff and the police in danger. We thank the police for their support and will assist them in any subsequent investigations.”

The match had been due to start at 16:30 local time (10:30pm Phuket time), but had been delayed by over an hour before the decision to call the match off was confirmed.

“The security and safety of everyone at Old Trafford remains of paramount importance,” the Premier League said in a statement.

“We understand and respect the strength of feeling but condemn all acts of violence, criminal damage and trespass, especially given the associated COVID-19 breaches.

“Fans have many channels by which to make their views known, but the actions of a minority seen today have no justification.”

Manchester City could have been crowned Premier League champions yesterday had United lost the match.

No rearranged date has yet been agreed for the fixture to be played.

Liverpool said they were in “full agreement” for the match to be called off as the safety of their players and staff could not be guaranteed.

“It is our position that public safety must be the number one factor in any such decision, with the ability to provide a secure environment for the participants, staff and officials being a particular priority,” Liverpool said in a statement.

“It was clearly not possible for this to be guaranteed today due to a situation which escalated rapidly.”

Anger towards the Glazers has been reignited by United’s part in a failed European Super League (ESL) project, that collapsed within 48 hours last month due to a backlash from fans, players, governments and governing bodies.

United and Liverpool were reportedly two of the leading drivers behind the project that sought to guarantee top level European football for 15 founder members every season without the need to qualify on the pitch.

In a rare public statement, United co-chairman Joel Glazer apologised to fans last month for signing up to the ESL.

“You made very clear your opposition to the European Super League, and we have listened. We got it wrong, and we want to show that we can put things right,” he said.

United fans also breached security at their club’s training ground in the days after the ESL proposals were made public to protest against the Glazers.

The Americans have owned United since a controversial £790 million (B34 billion) leveraged takeover in 2005 saddled the club with huge debt repayments.

The combination of interest payments on the debt and dividends paid to the Glazers has already cost the English giants over £1 billion during their ownership.

That cost has been borne on the field as United have not won the Premier League since legendary former manager Alex Ferguson retired in 2013.

Early in the Glazers’ reign, United fans wore the green and gold colours of Newton Heath, the club founded in 1878 that eventually became Manchester United 24 years later, as a sign of protest.

Green and gold scarves and flares were back at Old Trafford yesterday, while there were a number of banners aimed at the Glazers.

United’s executive vice-chairman Ed Woodward has already announced he will be leaving his role by the end of the year amid the fallout from the failed ESL project.

“There’s huge discontent, not just across Manchester United fans, but I think for football fans up and down the country and I think they are just saying enough is enough,” former United captain Gary Neville told Sky Sports.