PHUKET: A 23-year-old man escaped from his car without injuries after it plunged into a tin mine lagoon in Koh Kaew yesterday afternoon (Oct 3). 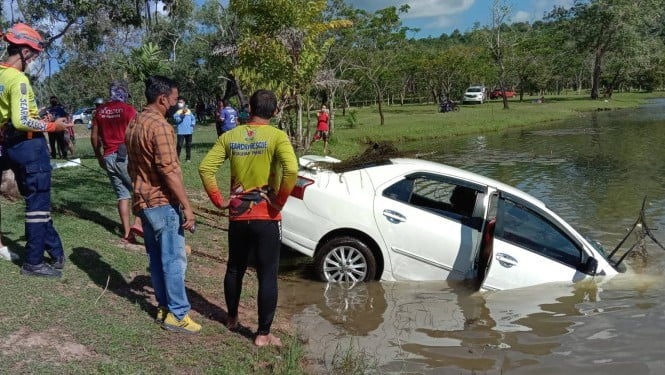 Capt Kruefa Phongsapan of the Phuket City Police said she was notified of the accident, on Route 3030, which joins Thepkrasattri Rd in Koh Kaew with the northern area of Kathu, at 1:50pm.

Police and rescue workers arrived at the scene to find the driver Thanapoom Hukhiao, 23, a resident of Phuket Town, standing safely nearby.

Mr Thanapoom told police that he was driving to Koh Kaew to meet a friend when the front left wheel started shaking, causing him to lose control of the car, a Toyota Vios, which veered off the road and into the lagoon.

He managed to escape via the car door before the car sank, Mr Thanapoom said.

Mr Thanapoom said he believed he was saved by his amulet of Thao Wessuwan hanging around his neck, which he clutched while making his escape from the sinking wreck.

Rescue divers from the Kusoldharm Foundation took about 15 minutes to locate the sunken vehicle in the water, which ranged from three to five metres deep.

A white spoiler was found in the shallow water by the edge of the lake and the car’s windscreen was broken, presumably by its impact with the water, Capt Kruefa said.

A tow truck team was called, who took more than two hours to retrieve the car from the water. The car was then taken to Phuket City Police Station.

Police have yet to conclude their investigation to determine whether Mr Thanapoom would face any charges, Capt Kruefa said.