FOOTBALL: Manchester City moved top of the Premier League thanks to Kevin De Bruyne’s stunning strike to beat Leicester 1-0 yesterday (Oct 29), as Liverpool’s five-year unbeaten home league run in front of fans was ended by a 2-1 defeat to Leeds. 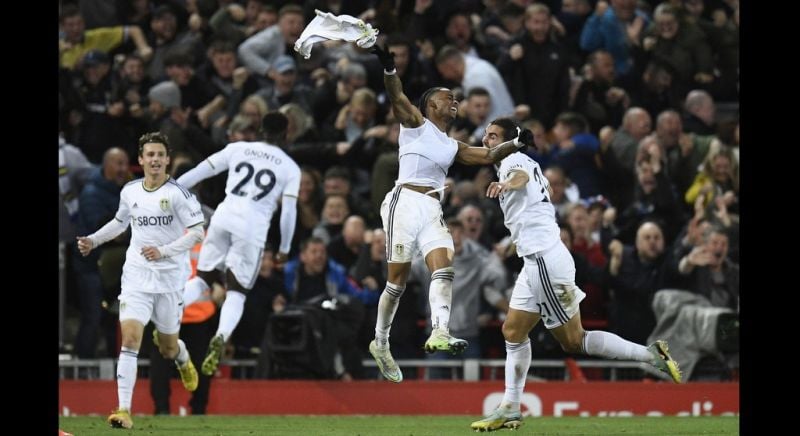 Chelsea boss Graham Potter suffered a nightmare return to Brighton with a 4-1 defeat, while Tottenham came from 2-0 down to beat Bournemouth 3-2 and remain in third.

City were without the free-scoring Erling Haaland for the trip to the King Power due to a foot injury and were blunted up front without the Norwegian’s firepower.

But one moment of magic from De Bruyne was enough as the Belgian’s free-kick four minutes into the second half clipped the inside of the post on its way past Danny Ward.

City needed one brilliant save from Ederson to prevent another sensational strike from a Belgian international as he turned Youri Tielemans’ volley onto the crossbar.

“I want this Kevin and we need this Kevin. The goals and assists he can do blind. But we need this type of involvement in the game and today that was the case,” said City boss Pep Guardiola.

With Arsenal not in action until this evening when they host Nottingham Forest, the victory lifts City one point ahead of the Gunners at the top of the table.

Liverpool now trail City by 13 points after suffering a first league defeat at Anfield in front of fans since losing to Crystal Palace in April 2017.

Leeds began the match second bottom of the table, but climbed to 15th with their first win in nine games courtesy of Crysencio Summerville’s stunning 89th minute winner.

Rodrigo’s early opener for the visitors was quickly cancelled out by Mohamed Salah.

But Liverpool have now lost twice as many games in the first 12 league matches this season as they did in 38 last season.

Jurgen Klopp’s men increasingly look outsiders just for a return to the Champions League next season as they slip to ninth, still eight points adrift of the top four.

“We cannot qualify for the Champions League if you play as inconsistent as we do in the moment,” said Klopp.

Potter had been unbeaten in his first nine games since leaving Brighton to take over at Chelsea last month.

By contrast, the Seagulls had not won in their first five games under new boss Roberto De Zerbi, but that all changed in a dominant first half by Brighton.

Leandro Trossard fired home the opener before Chelsea gifted Brighton two more before half-time as both Ruben Loftus-Cheek and Trevoh Chalobah deflected crosses into their own goal.

Kai Havertz’s header early in the second half pulled a goal back, but Pascal Gross rounded off a memorable win for Brighton late on.

“It felt nice…until the game started,” said Potter of his return to the south coast. “I’m not going to throw the players under the bus at all because they’ve been brilliant for us.

“I have to take responsibility and try to find a way for us to do better.”

Tottenham were staring a third consecutive league defeat in the face after Kieffer Moore struck twice for Bournemouth either side of half-time.

Spurs have at times looked toothless at times going forward in recent weeks, but won the game thanks to two set-pieces after Ryan Sessegnon pulled a goal back just before the hour mark.

Newcastle underlined their threat to the traditional powers for a place in the top four with a 4-0 dismantling of Aston Villa.

Callum Wilson struck twice to further his case for a call-up to England’s World Cup squad with Gareth Southgate in attendance at St. James’ Park.

Joelinton rounded off a fine counter-attack to make it 3-0 before Miguel Almiron continued his sensational form with his sixth goal in as many games.

Crystal Palace moved into the top half with a 1-0 win over Southampton as Odsonne Edouard slotted home the only goal at Selhurst Park.

Wolves remain in the bottom three despite coming from behind to salvage a 1-1 draw at Brentford.

Fulham moved up to seventh place despite squandering a host of chances in a 0-0 draw against Everton.