FOOTBALL: Tottenham manager Jose Mourinho believes Manchester City’s two-season ban from the Champions League has opened the door for a host of teams to qualify for next season’s competition. 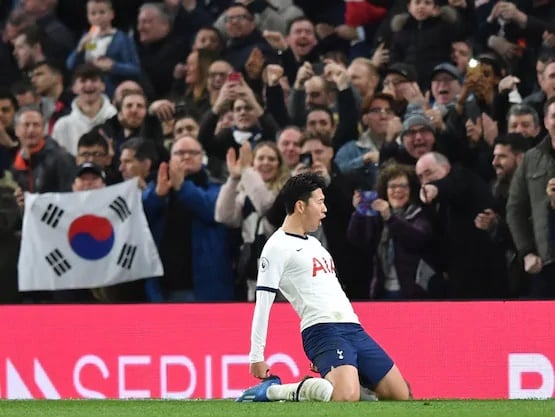 Son Heung-min became the first Asian player to net 50 Premier League goals with his first at Villa Park yesterday. He then netted the winning goal in stoppage time to lift his team to fifth in the table. Photo: AFP

Mourinho’s men moved up to fifth in the Premier League, which could be enough to secure Champions League football should City’s appeal against the ban fail, thanks to Son Heung-min’s stoppage time winner to beat Aston Villa 3-2 yesterday (Feb 16).

Spurs are also now just one point behind Mourinho’s old club Chelsea, who they face at Stamford Bridge next weekend.

However, all of the top 10 are now within six points of what could be a Champions League place.

“A window opens for many teams,” said Mourinho. “What seemed far, now the fifth place is not far. Arsenal, Everton, Sheffield United, Wolves. Everyone will feel they have the chance.”

Tottenham had to bounce back from a nightmare start at Villa Park when Toby Alderweireld sliced into his own goal.

Alderweireld had not travelled with his teammates to Birmingham after attending the birth of his son this week and admitted to feeling heavy legged after he turned Anwar El Ghazi’s deflected cross into his own net after just nine minutes.

But the Belgian quickly made amends at the other end by smashing a loose ball from a corner high past the helpless Pepe Reina to equalise.

“It wasn’t my best performance. It was a beautiful week for me with the birth of my son but yesterday I had to travel eight hours so it was difficult,” said Alderweireld.

“My legs were not sharp. But I’m happy to help the team with the goal, the lads helped me today.”

Villa could have been two in front before Tottenham levelled as only a goal-line block from Ben Davies denied Douglas Luiz.

However, Dean Smith’s side find themselves in a relegation battle as they have now conceded more goals than any other team in the league.

“They have a front four that can hurt anyone, that’s why we had to get forward and defend on the front foot,” said Smith, with Villa still just one point above the bottom three.

“On the whole I thought we dealt with them really well but we’re disappointed with the goals we conceded.”

A rash challenge by Bjorn Engels on Steven Bergwijn handed the visitors the chance to go in front just before the break, albeit it took a VAR review to award a penalty.

Son’s spot-kick was saved by Reina, but the South Korean followed up to prod home and become the first Asian player to score 50 Premier League goals.

Engels also made amends as an attacking force as he rose highest to head home Jack Grealish’s corner eight minutes into the second half, but Mourinho was furious at Alderweireld’s defending.

“I’d say he’s scored three goals: the own goal, his goal and then when he loses the duel with Engels,” added the Portuguese.

Tottenham took the game to the hosts in the final quarter, but struggled to find a way past the inspired Reina.

However, Son had the final say by composing himself to slot just beyond Reina’s reach with virtually the last action of the game and send Spurs closer to a fifth straight season of Champions League football.

Victory was just the second in eight league games since Mikel Arteta took charge and there was plenty of encouragement for the 37-year-old in Arsenal’s second half performance after an all too familiar subdued first 45 minutes.

“We talked before the game that we wanted to turn draws into wins,” added Arteta after a run of six draws in eight games.

“The first half it was a little bit slow, but the way they play with low block, you can get frustrated. We improved much more in the second half.”

Arteta handed Eddie Nketiah his first Premier League start up front at the expense of the out-of-form Alexandre Lacazette.

The 20-year-old missed his big chance to make an impact when he hit the bar from Nicolas Pepe’s cut-back in an explosive start to the second period from Arsenal.

Pierre-Emerick Aubameyang showed his young apprentice how to pounce in front of goal as he rose highest to power home Pepe’s floated cross on 54 minutes.

One of the revelations of Arteta’s early days in charge has been Bukayo Saka’s performances as a makeshift left-back.

No Arsenal player has created more goals than the 18-year-old this season and Saka nutmegged Valentino Lazaro before teeing up Pepe to fire home the hosts’ second from close range.

“He takes responsibility, he takes risks in the final third. He is a player who wants to make an impact, he has courage,” said Arteta.

Newcastle have scored just 24 goals in 26 league games this season and their lack of a goal threat was obvious as they chased the game in the final half hour.

But Steve Bruce was most disappointed with their defending as they conceded twice more in the closing stages.

“The goals were gave away were not like us, it was too easy,” said Bruce. ‘We did not start the half like we should’ve done. We’ve been sloppy and given away awful goals.”

Lacazette replaced Nketiah five minutes from time and made a huge impact to give his confidence a much-needed boost.

Luck then shone on Lacazette to end a nine-game goal drought as his right-footed shot flicked off his left foot and flew into the top corner in the fifth minute of stoppage time.