PHUKET: Some 60 members of the Phuket Community Rights Development Network gathered in front the New Phuket Provincial Hall yesterday (Mar 24) to submit a formal request to the Phuket Governor to expedite action on a slew of grievances affecting local residents.

economicsland
By The Phuket News 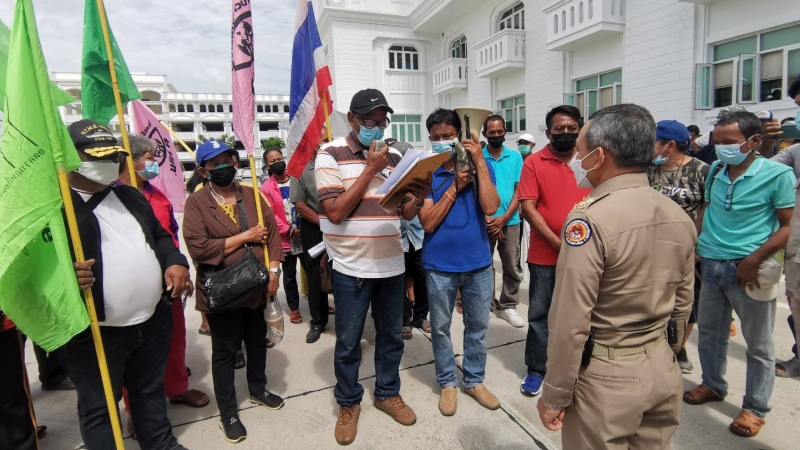 The formal request cited 15 cases that remained still unresolved, including Community Title deeds for poor people living on state land and providing basic utilities such as electricity and water supply to such people.

The group, led by Somjin Chuchuay, were also members of the Phuket branch of the People for Social Justice Movement, reported the Phuket office of the Public Relations Department (PR Phuket).

Mr Somjin pointed out that the 15 unresolved issues in Phuket were among those presented to Cabinet resolution on Feb 1 this year by Deputy Prime Minister Gen Prawit Wongsuwan, who chairs the Resolution Committee of the People;s Social Justice Movement.

The Cabinet had resolved for action to be taken to resolve the 15 cases in Phuket, he said.

“There has been a proposal for solutions to the problems to be presented to the Cabinet,” Mr Somjin noted.

“In Phuket, there are many communities involved and many cases are for asking to consider using the guidelines for upgrading Community Deeds in accordance with Section 10 (4) of the National Land Policy Committee Act B.E. to be pilot areas for arranging land in the form of a community deed in the future,” he said.

“In this regard, Deputy Prime Minister [Gen Prawit] was invited to chair the event ‘Community Deed Fair’, also called ‘Community Deed Problems’ in Phuket. There are 17 communities in total across the island that are seeking Community Title Deeds,” Mr Somjin said.

Approval of Community Title Deeds for the communities would resolve many continuing problems for the residents, he explained.

Without registered addresses, the residents were unable to have electricity and water supply. Local municipalities cannot build streets for the communities because in legal terms there were no residents registered as living in those areas, he Mr Somjin added.

The community living behind the Saphan Hin stage area and Ton Pho Community on the outskirts of Phuket Town were two other communities in need of official recognition, he said.