FORMULA ONE: Domination tends to look easy in Formula One, but Lewis Hamilton’s peerless Spanish Grand Prix victory wasn’t the effortless parade the TV cameras made it out to be. 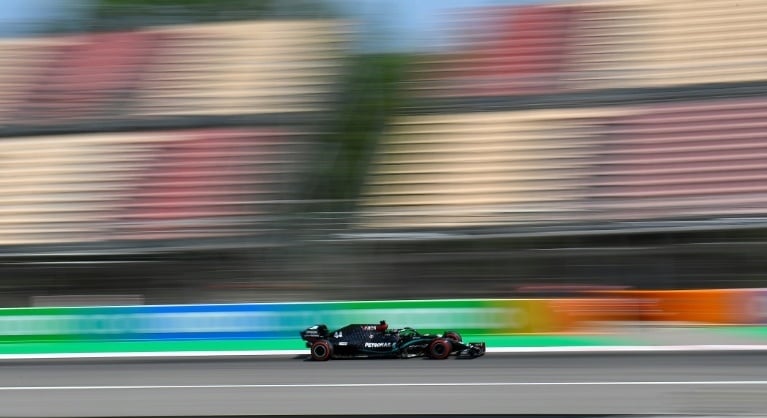 The older Hamilton’s worn tyres became in Barcelona the faster he got, unlike the previous weekend at Silverstone where tyre troube was his downfall. Photo: AFP.

Formula One arrived in Barcelona with electricity in the air. Only last month the paddock had been wondering aloud whether anyone could beat Mercedes in 2020, but after Max Verstappen’s breakthrough win at tyre-destroying Silverstone one week earlier, optimism had taken hold that the championship was about to break open.

Two weeks in a row Mercedes had struggled with tyre wear through a combination of Silverstone’s high-downforce demands and stiflingly hot weather.

With the Circuit de Barcelona-Catalunya another high-downforce track basking in Spanish summer sunshine, conditions appeared conducive to a repeat.

Indeed on the evidence of practice Red Bull Racing would again hold a pace advantage in race trim, even if no-one would be able to touch the Mercedes machines in qualifying.The game seemed on.

Verstappen, starting third, jumped Valtteri Bottas for second off the line and clung close to Hamilton, doing exactly as he needed to have a chance to claim back-to-back victories.

But the dream lasted only 10 laps. Having worn in the delicate soft tyres, Hamilton put his foot down.

Verstappen tried to follow, but his Red Bull machine couldn’t keep up. After another 10 laps the gap had grown from 1.5 seconds to more than 7.1, and while the Briton was massaging more pace from his tyres, his Dutch pursuer was complaining the life had left his.

Hope fading fast, Verstappen scrambled back to the pits for a harder tyre. Hamilton did likewise, but after another 10 laps the cycle repeated, and the Mercedes bolted again.

Inexorably his lead grew, slowly at first but by the end of the stint by as much as 1.5 seconds a lap.

Verstappen’s chase was finished, but Hamilton wasn’t yet done. The older his worn tyres became - the same compound that devastatingly blistered on his car only one week earlier - the faster he became.

Quicker and quicker, his lead reached almost half a minute when he took the chequered flag.

“I was just in a daze out there,” he said after the race. “I didn’t even know it was the last lap at the end. That’s how zoned in I was. I was ready to keep going.

“We all try for perfection, and it’s not always easy to deliver like that, but… I think today is right up there with some of the best [drives] that I’ve personally felt I’ve done.

“I was in a perfect zone, and that’s the zone that I dream of being in.”

From the outside it looked easy, but on the inside Hamilton’s race was the battle of maintaining the optimal balance between performance and management, between putting his foot down and spending wisely his resources.

It was a masterclass in race craft on a level no other driver could access - just ask Valtteri Bottas, 44 seconds down the road.

But if pre-race optimists had failed to take into account Hamilton’s virtues behind the wheel, they were naive to think Mercedes couldn’t rebound from failure.

Never in the F1’s turbo-hybrid era has the six-time constructors champion shown a consistent weakness, and there was an indicative zeal among the team to return to base after its rare loss at Silverstone and learn where the car had fallen short.

Within only four days the turnaround had been emphatic.

“Bring on the heat!” Mercedes boss Toto Wolff bellowed amid the post-race celebrations.

The heat isn’t to be feared in Formula One; only the unstoppable combination of Mercedes and Lewis Hamilton.