PHUKET: The Phuket Old Town Community has invited local residents and tourists to feel the New Year spirit at the renowned Lard Yai street fair on Thalang Rd. Instead of one weekend event, there will be two markets on both the last Saturday of 2022 (Dec 31) and the following first Sunday of 2023 (Jan 1).

CommunityCultureExploreHistory-of-PhuketHistoryLifestyle
By The Phuket News 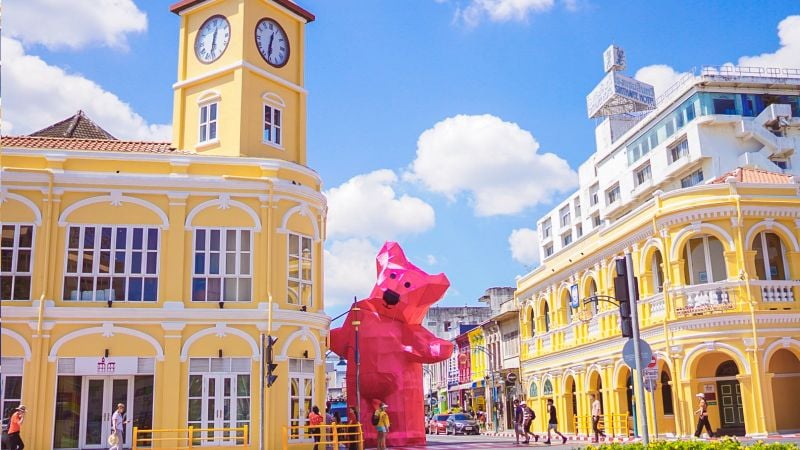 “Celebrating the New Year festival, Lard Yai fair is delighted to announce that we will be open on both Saturday the 31st of December and Sunday the 1st of January!” the organisers said in English.

“At the end of the year we [finally] have good weather. Come to walk, shop, try food, listen to live music and watch performances by street artists on five stages before proceeding to the Countdown Party [in Saphan Hin].  Phuket Walking Street Lad Yai is a good place and a free check-in spot in the heart of Phuket Town,” the Phuket Old Town Community adds, though keeping this part in Thai language only.

The invitation above is for the Dec 31 event as one can tell by the mentioning of Phuket Countdown Party. Yet the nearest Lard Yai will be held literally today (Dec 25) for holiday crowd to share the festive spirit, enjoy local food and drinks, buy one-of-a-kind souvenirs, and take an opportunity to shoot a selfie with the giant, pink, peeking around the corner bear, a new local sensation on Phuket social media. Another great photo opportunity awaits instagrammers at Surin Circle, better known as the Clocktower Circle.

Those new to Phuket Town also should not miss local music establishements and small restaurants, some of them listed in the Michelin Guide for Thailand. Just bear in mind that some of the Michelin-listed venues can be closed during late hours as they serve breakfast/lunch dishes such as the Peranakan rice porridge khao tom or Malay roti pancakes with curry.

Though conducted on what has been Phuket Town’s main commercial street for 100+ years, the event itself is a fairly new addition to the assembly of Phuket entertainment gems.

The first fair was held on Thalang Rd in September, 2023, and the organisers were not shy to admit that they were copying the success of the awesome Chiang Mai Sunday Market Walking Street.

The theme of the first event is was ‘Let’s Phuketian be Phuketian’, and the fair still emphasises the uniqueness of Phuket community uniting people of various descents, including Thai, Chinese, Malay, Indian and now European, Austronesian and American as well.

Since the XIX century Phuket Old Town – which was not old at all at that time – was a true melting pot where various cultures contributed to what now makes a ’true Phuketian’ be that person Peranakan, Malay or simply Thai in their own eyes.

As the Phuket Old Town Community member Somyos Pathan explained to The Phuket News in 2013: “Thalang Road is home to many kinds of shops, people and types of food. The market will show the different and unique make up of Phuket. Thalang Rd has store owners from a wide variety of races and religions, including India, Pakistan and China, Buddhism and Muslim”.

Mr Somyos – a Thalang Rd shop owner of mixed Pakistan-Thai heritage – was “nueng roi persent’ (100%) sure that Lard Yai street market would be a great showcase of what makes Phuket so unique and appealing besides ’sun, sea, and sand’. The following nine years of Lard Yai’s success prove the old shop owner to be absolutely right.

Worth mentioning is also that the Phuket Old Town Community from the very start said the event will be Lard Yai (’Big [mar]ket’ in local version of Thai) and not simply ’Phuket Sunday Market Walking Street’. Preserving traditional names and local speech is viewed by the community to be as important as preserving local architecture, food, fashion, music and culture in general. Plus there is an obvious reason – Thalang Rd is simply a Lard Yai still, just as it was a century ago.

“Thalang Rd used to be known as ‘Lard Yai’ back when it was the centre of trade," said member of the Phuket Old Town Community Wanna Boonlom in 2013.