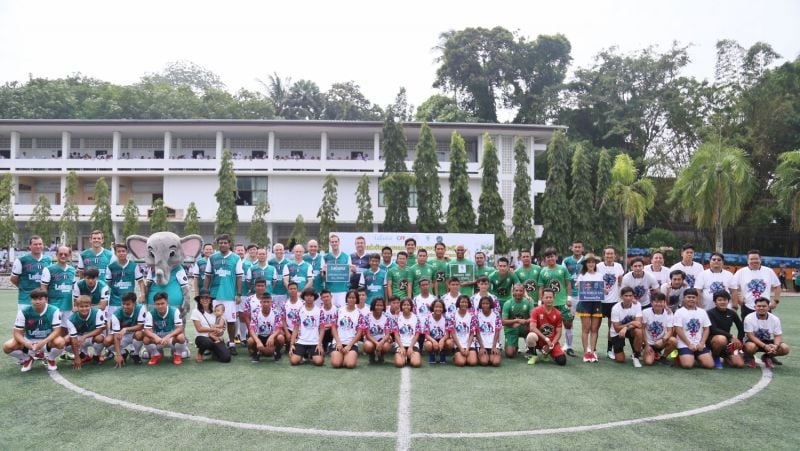 A “Battle of the Chefs” charity dinner raised B1.4 million through proceeds from dinner tickets, raffles and live and silent auctions.

The Children First Charity Event (CFCE), held between September 21-23, raised more than B1.55 million for the Children First Fund (CFF) in support of seven orphanages in Phuket, housing more than 400 orphans and underprivileged children.

The CFCE on Saturday, September 21 was a charity journey from day into night under the theme “Swing for Good”, where more than 90 golfers participated in a fun golf tournament throughout the day.

The golfers then sat back and unwound in a unique “Battle of the Chefs” charity dinner gourmet experience at Angsana Ballroom, Angsana Laguna Phuket. The evening saw a total of 180 charity diners who collectively raised B1.4 million through proceeds from dinner tickets, raffles and live and silent auctions.

The charity football raised another B140,000 for the CFF (B80,000 from Phuket hotels’ entries to the football tournament, B30,000 from a live auction for Kao’s founder Artiwara “Toon” Kongmalai’s football boots, and another B30,000 cash donation from Toon himself to match the auction winner’s bid).

Laguna Phuket’s Managing Director Ravi Chandran said, “As a member of the Phuket community, Laguna Phuket has been doing our part in developing a sustainable community since the resort’s establishment some 30 years ago. Children First Fund and Children First Charity Events are a couple of the newer initiatives added to a long list of our sustainability efforts.

“I’d like to thank all our event partners, sponsors, donors and guests for your kind and generous contribution that will keep the Children First Fund going for at least one full year. Thanks also go to many other leading orgainisations like the Phuket Hotels Association, The Rotary Club of Patong Beach, Phuket Has Been Good To Us, The Life Home Project, to name only a few, who are vital in spearheading various charitable projects that help improve the livelihood of the people in Phuket.”

The CFCE also feature an impressive list of prize items generously donated for online auction by leading hospitality and tourism operators from Phuket, Thailand and around the world. The CFCE’s online auction features stellar prize items such as 5-star hotel stays, accommodation packages, memberships to leading golf and sport clubs, cruises, tours, spas, golf green fees, tickets to water parks and many more lifestyle activities. All are on offer at amazing bidding prices to guarantee best deals for kind bidders.

The online auction is open at www.lagunaphuket.com/online-auction and closes on Thursday, October 10.

The Phuket News is a proud media partner of the Laguna Phuket Children First Charity Event.