PHUKET: Following the recent reports on the state of Phuket’s condo and villa markets, Knight Frank Thailand have now issued a report on the ‘State of Phuket Luxury and Upscale Hotel Market in 2020, and Outlook for 2021’.

propertytourism
By The Phuket News 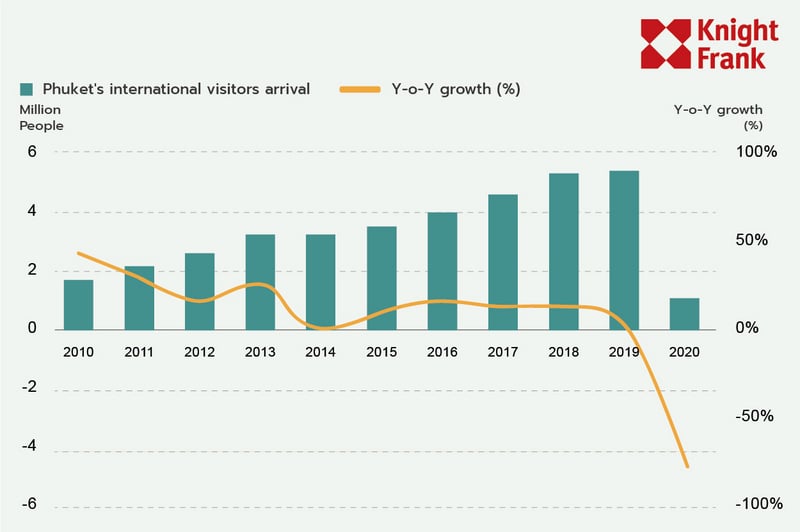 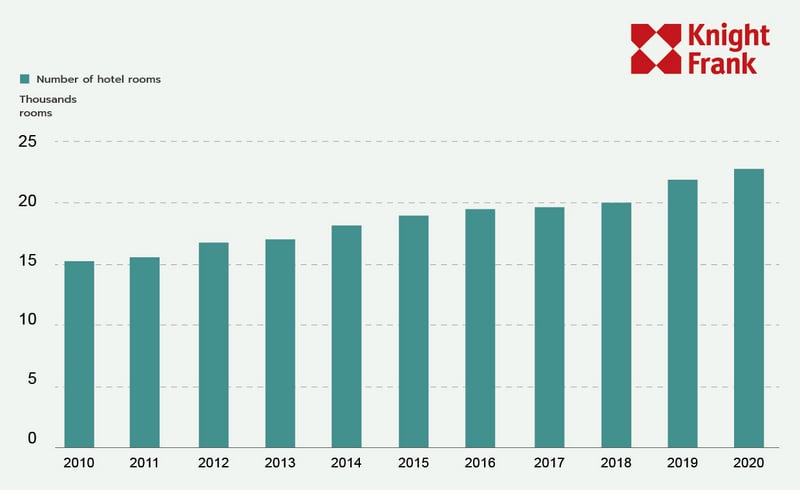 The report has been drafted by Carlos Martinez, Director of Research and Consultancy, Knight Frank Thailand. His report in full is as follows:

Some hotel operators temporarily suspended operations, and others offered discounts on room rates, and promotion campaigns to attract the domestic-only demand.

This is particularly harmful to the island’s economy as over 90% of the tourism income came from foreign visitors before the pandemic, in 2019.

To offset the lack of foreign visitors, the government launched a plan on July 15 to encourage domestic traveling consisting of the ‘we plan together’ campaign, which subsidizes 40% of hotel expenditures and airfares. Yet, the number of domestic arrivals were down by 64% y-o-y in 2020.

The Chinese market continued to be the main source market in 2020 even though it declined in the first quarter by 33.8% YoY to 1.06 million as the Chinese government imposed outbound travel restrictions in January 2020.

As the international travel restrictions continued, the occupancy rate of luxury and upscale hotels in Phuket dropped further in the second half of the year to 14%. The overall occupancy rate for 2020 fell 34 percentage points YoY to 26%.

The temporary closure of the Phuket International Airport from April to September 2020, resulted in the lowest level of hotel occupancy rate forcing some hotel operators to suspend their operations until market recovery.

The average daily rate (ADR) of luxury and upscale hotels fell 7% YoY to B3,750 making this drop a record low for the past few years. Hotels compete to attract the domestic market by offering lower rates before the launch of the government ‘We Travel Together’ program.

Mr Martinez added in 2020, only one hotel opened in the first half of the year; Four Points by Sheraton Patong Beach with 600 rooms. Seven hotels postponed their openings due to the current epidemic situation, totaling 2,077 rooms. These include Dhawa Phuket hotel (150 rooms), Pamooko Pamooka (512 rooms), Ramada Plaza Grand Himalai Resort (426 rooms), Utopia Mai Khao (92 rooms), The Beach Plaza (730 rooms), and Angsana Oceanview (116 rooms), in the upscale segment, and 137 Pillars Resort Phuket (51 rooms) in the luxury segment.

Phuket has been one of the hardest-hit destinations in Thailand in 2020. In April, the Government ordered temporary mass hotel closures as the province was hit by a rise in the number of Covid-19 cases. The Phuket International Airport reopened for domestic arrivals in June 2020, after a two-month closure due to the pandemic. In the second half of 2020, AOT only recorded 775,118 domestic passenger arrivals, a 57% YoY decline. Yet, the average length of stay of domestic tourists is less than half than that of foreign tourists, averaging 1.8 days only, thus contributing weakly to a significant increase in hotel occupancy levels.

Overall, we expect the average occupancy rate for luxury and upscale hotels in Phuket to continue to levels below 25%, and the ADR to continue low in the first half of 2021.

The outlook for 2021 is not promising, as the second COVID-19 wave at the beginning of the year prompted the government to impose further travel restrictions at a provincial level, in addition to the pandemic spread records in the main source international markets. Also, the Chinese government continues to enforce a ban on Chinese outgoings, the main source market. Thus, hotel business closures and extensions of existing temporarily suspended businesses are expected to happen given the low demand for hotel rooms.

Phuket hotel market will only recover once the foreign visitors are back to the island, however, Thai borders are likely to remain closed for international visitors until the population gets vaccinated which might take most of the year 2021. Subject to the success of the vaccine implementation, an optimistic expectation would be a quick recovery starting in 2022, achieving pre-COVID levels in 2023. Although other negative factors might affect the number of international and domestic travelers such as the global economic uncertainty, visitors’ confidence in traveling, and appreciation of the Thai baht, the pent up demand will likely drive the recovery after the lift of global travel restrictions, especially from the main source markets; China, Russia, and Europe, that showed a quick rebound after other disasters in the past such as SARS and the Tsunami, returning after only one season.

This unprecedented situation presents the opportunity for the hospitality industry in the island to widen their focus towards domestic demand, and become somewhat less dependent on foreign tourists, resulting in a better balance between domestic and foreign visitors, particularly considering the high accommodation supply in the form of hotels and condominiums for rent.