PHUKET: Nattha Kahapana, Deputy Managing Director and Head of Knight Frank Phuket, has delivered an in-depth review of the impact of the COVID-19 pandemic on Phuket’s condominium market.

property
By The Phuket News 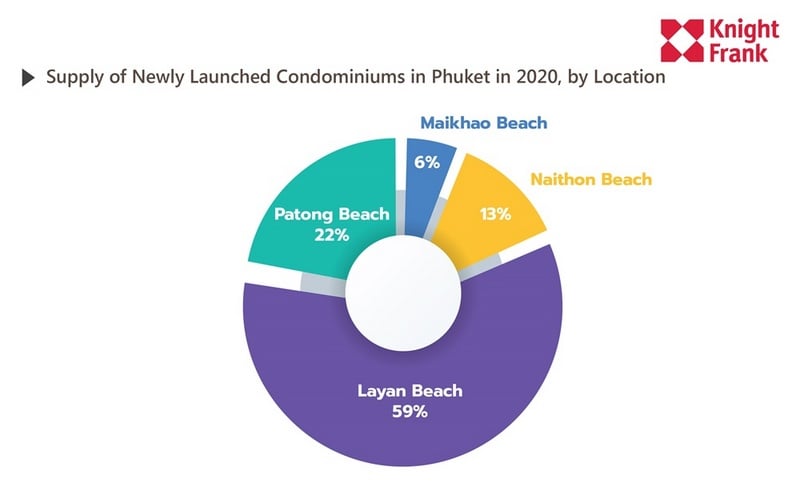 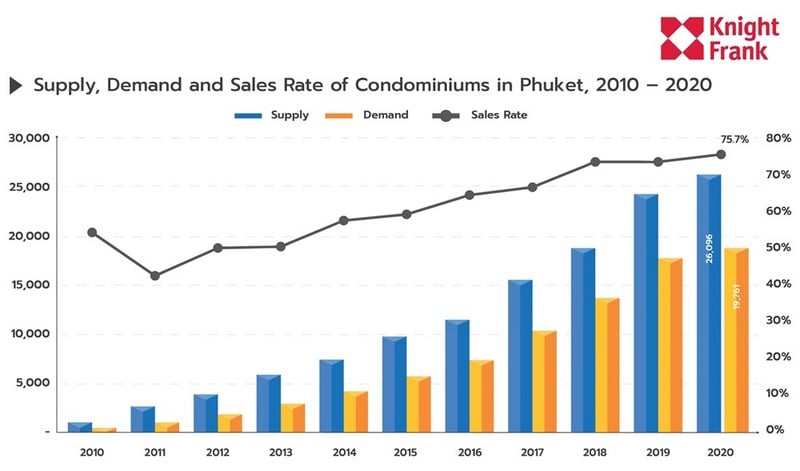 In a release issued yesterday (Feb 8), Mr Natha explained the depth of the impact and the reasons behind it, and specifically how the market and developers have been affected.

Phuket is one of Asia’s best tourism destinations. The island has the potential to support tourism as well as investment. As the tourist numbers increased each year, the property business was among the sectors that grew continuously.

The large number of foreign tourists that visited each year included a large group that started to look at condominiums to buy, so they would have a place to stay when they travelled to Phuket. Some also sought additional rental income when they were not in residence.

For these reasons, the real estate business in Phuket became of great interest to investors as they saw foreign tourists being a main source of purchasing power.

Also, Thai investors turned their attention to the market. Condominium projects that launched in Phuket were the types that focused on rental returns, and such projects invited hotel brands to manage the properties, which boosted the reputations of the projects.

From the rental yields received, Phuket became an attractive place to buy condominiums for investment. However, the COVID-19 pandemic drastically reduced the volume of tourists, as they could not travel.

Heavily reliant on tourism, the economy of Phuket came to a halt and became sluggish. The real estate sector of Phuket was directly affected. Even though Thai tourists continued to come, they were not enough to revive the economy of the island.

At the same time, however, there were new condominiums launched for sale; such operators believe that many tourists and investors would continue to fuel demand for condominiums should the situation return to normal.

From the research results of Knight Frank Thailand, it was found that, at the end of 2020, the total supply of condominiums in Phuket stood at 26,096 units.

This significant drop in new supply is attributed to the COVID-19 outbreak, which has severely affected demand. Operators therefore delayed the launches of projects. Moreover, commercial banks became concerned about the uncertainty of the situation, and implemented tight controls of lending for project development. Therefore, developers suspended the launches of projects amidst this situation.

In 2020, the supply of new condominiums launched was mostly in Layan, at 59%, followed by ​​the Patong and Nai Thon Beach areas, accounting for 22% and 13%, respectively.

The Mai Khao Beach area contained the smallest number of new condominium launches, at only 6% of the total supply. Mai Khao, an area in the north of Phuket, is not yet very popular as it is far from amenities, compared to other beaches. In consequence, Mai Khao has quite a lot of land left.

This decrease is due to the lack of foreign tourists, a major source of purchasing power, who were unable to enter the country because of the Covid-19 pandemic. Phuket was severely affected, whether it was tourism, employment, or even real estate.

There were some condominium projects that had to stop sales or had low sales volume.

Moreover, they have been unable to apply for loans from financial institutions who are now quite strict in lending for condominium developments.

In addition, there are some projects that have stopped selling, opting to wait and see.

Due to COVID-19, foreign tourists are unable to come to Phuket and they comprise the group of condominium buyers in Phuket.

In the past, nearly 100% of condominium buyers were foreign tourists and investors, reflecting Phuket’s status as a well-known tourist destination that attracts many foreign visitors.

These tourists remain the main buyer group of condominiums, which they live in during their travels to or holidays in Phuket.

These days, however, the group of buyers of Phuket condominiums is more diverse. About 90%of buyers are still foreigners, but around 10% are Thai investors who have seen channels for investing in real estate.

Most of the foreigners who buy condominiums in Phuket include Russians, Chinese, Hong Kong residents and Singaporeans. Other nationalities include the British, French, Germans, Canadians, Australians, New Zealanders, Americans, Europeans and Middle Easterners.

Most of the condominium projects that have been able to continue selling are those that maintain living standards comparable to those of four- to five-star hotels. These projects also engaged a hotel chain to manage the projects, building trust among buyers.

They provide return to buyers in a period of three to five years, which is an incentive for tourists and investors. Besides earning rental income, buyers can also stay 30 to 45 days a year.

(A table included in the image gallery above depicts the condominium projects that have brought in chain hotels to manage them, as well as the yield and duration of the yield.)

The average selling price of Phuket condominiums with a sea view, as of the end of 2020, was B192,758 per square metre.

It can be seen that the selling price has declined from 2019 due to the COVID-19 situation, which made almost all foreign tourists unable to travel. As a result of their absence from the market, sales of condominiums have decreased greatly. Operators therefore agreed to lower prices to attract buyers or investors to return to investing.

To further drive sales, they also used methods of selling through online channels or via an agency located in a foreign country to help promote their project. As a result, there were still some condominium sales from abroad, but not much. The buyers represented foreigners who have travelled to Phuket; when the prices were lowered, they then decided to make a purchase.

Mr Nattha concluded his report by saying that the Phuket condominium market in 2021 is expected to continue to slow and be hit hard due to the new COVID-19 wave.

With foreign tourists still unable to travel, the economy has not improved. Phuket still has no income from tourists, which has been the island’s main source of revenue.

In the first half of 2021, operators will still delay project launches. They will wait and see the situation before going ahead with project launches during the second half of the year. The investment trend will be towards smaller projects and possibly joint ventures with local investors in Phuket.

It is expected that the Phuket economy in 2021 will stay sluggish until the beginning of 2022, at which time the Phuket economy may need from six months to one year to recover to only 50% of the volume of tourists, as not all foreigners would be able to travel at that time.

The main buyers are expected to be the Chinese and Russians. Those from Europe may have to wait a while until the COVID-19 pandemic eases.

The condominiums that foreigners buy would serve as residential property, a second home rather than an investment, as Thailand is seen as a safe and liveable city with good standards of medical care and epidemic controls.

As for the Thai investors, they are still postponing their investments in real estate in Phuket; such investors are waiting for foreigners to resume travel before they start investing.

Overall, real estate in Phuket will return growing after 2022, following the return of foreign tourists.