Keep an eye out for the croc, says Phuket Vice Governor

Keep an eye out for the croc, says Phuket Vice Governor

PHUKET: Phuket Vice Governor Pichet Panapong has asked all people, especially local officials, to keep an eye out for the two-metre-long crocodile that remains at large more than a week after it was seen near the Chalong Pier marina on Mar 13

marineanimalsSafetytourism
By The Phuket News The meeting was held to come up with ideas on how to catch the croc. Photo: PR Phuket 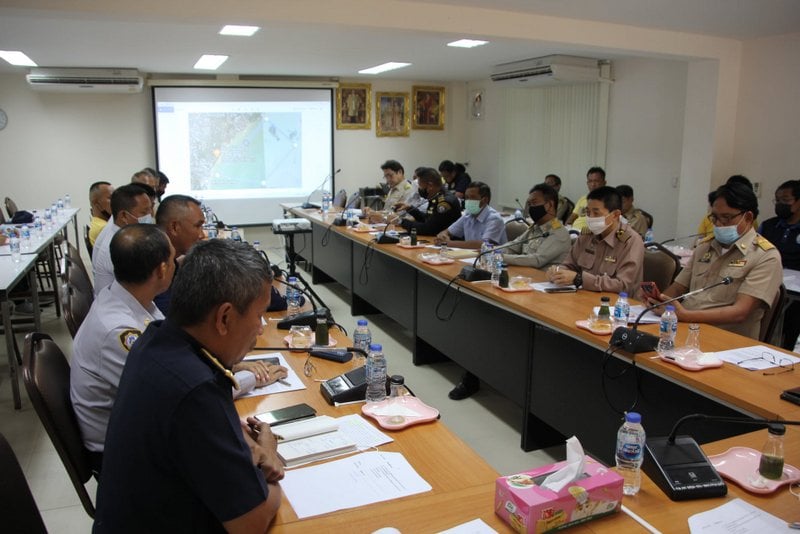 V/Gov Pichet delivered his plea at a meeting held yesterday (Mar 22) to come up with ideas on how to catch the croc.

Present at the meeting was Nikhom Suksawat, leader of the ‘Kraithong Lumnamtapi’ of expert croc catchers from the Department of Fisheries in Surat Thani, which were called in catch the croc.

The ‘Kraithong Lumnamtapi’ team have yet to locate the croc, so far has yet to be given a nickname, V/Gov Pichet confirmed.

“The croc was last seen around Yanui Beach in Rawai. The team tried to keep track of the croc throughout both the daytime and the nighttime,” he said.

“The Phuket Provincial Government has ordered local administration officers and village heads to inform local people about the crocodile and to ask them to help keep an eye out for it,” V/Gov Pichet added.

“The crocodile submerges quickly when it realises it has been seen, so we need help from local people to help coordinate and find it,” he said.

“If you see the crocodile, please inform your village head or the Phuket Provincial Fisheries Office, so that the team will go to the area as fast as possible,” he said.

“The Phuket government and relevant officers will catch the crocodile as soon as possible,” V/Gov Pichet assured.

The Phuket office of the Department of Fisheries can be contacted during government office hours at 076-212460.

The Kraithong Lumnamtapi team can be contacted directly through their Facebook page here.

Unlike in the hunt in 2018 for the female crocodile now named ‘Yanui’, no beaches have been closed while the search continues for Phuket’s latest crocodile at large.

Yanui took just days to make her way up the west coast to where she was caught off Layan Beach a week after she was spotted at the southern end of the island, stopping off at Kata Noi and passing Patong en route.

After an extensive 11-day hunt, Yanui was finally caught at Leypang Beach, right next to Layan and Bang Tao Beaches, in Cherng Talay, halfway up Phuket’s west coast.