WORLD: Japan’s Prime Minister Shinzo Abe announced yesterday (Aug 28) he will resign, ending his record-breaking tenure in a bombshell development that kicks off a leadership race in the world’s third-largest economy. 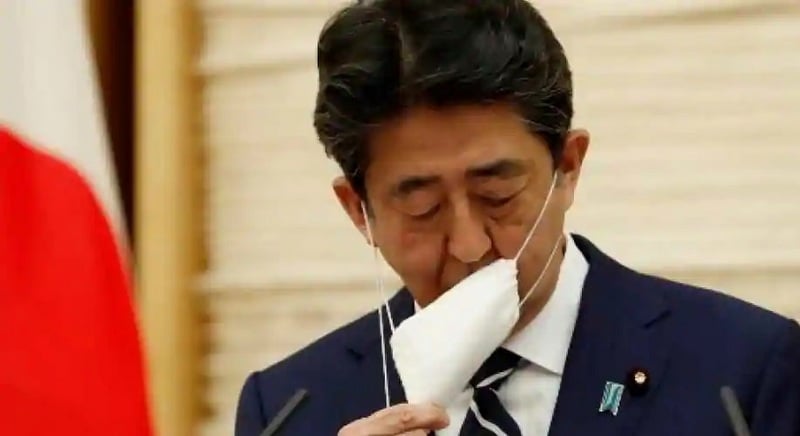 Abe said he is suffering a recurrence of the ulcerative colitis that forced him to cut short a first term in office, and that he no longer felt able to continue as prime minister.

“Now that I am not able to fulfil the mandate from the people with confidence, I have decided that I should no longer occupy the position of the prime minister,” he said.

While speculation about Abe’s political future has grown in recent weeks, after two hospital visits for unspecified health checks, the resignation nonetheless came as a surprise.

Even as recently as yesterday morning, the government spokesman had appeared to dismiss concerns about Abe’s health and suggested he would stay on.

But Abe made clear that would not be possible, apologising for once again cutting short his tenure.

“I would like to sincerely apologise to the people of Japan for leaving my post with one year left in my term of office, and amid the coronavirus woes,” he said, bowing deeply.

Abe said he would “firmly execute my duty to the end”, and until the next prime minister is appointed, possibly through a leadership election involving ruling party lawmakers and members.

The resignation shocked the markets, with Tokyo stocks plunging more than 2% towards the end of afternoon trade when reports of Abe’s decision first emerged.

“It was a big surprise”, said Shinichi Nishikawa, a professor of political science at Meiji University in Tokyo.

“His resignation comes at a time when Japan is facing tough issues, including measures against the coronavirus,” Nishikawa told AFP.

Abe had been expected to stay in office until the end of his term as LDP leader in September 2021, and the jockeying for position to succeed him was still in its early stages.

Kishida is rumoured to be Abe’s personal choice, while Aso commands one of the strongest blocs within the ruling party.

Most of the potential successors are seen as unlikely to break significantly with Abe’s policies.

Abe declined to be drawn on who he would like to see take the top job, saying he had “no intention” of influencing the election, and that those often floated as candidates were all “highly capable”.

Experts said the election process was likely to happen in the coming weeks, with a new parliamentary session possible by October.

Abe’s decision to step down will be bitterly familiar for the man who was forced to leave office just one year after becoming the country’s youngest-ever prime minister.

He has since become Japan’s longest-serving premier, forever associated with the economic policy that bears his name: Abenomics.

He said his legacy would be for others to decide but pointed to his efforts to bring Barack Obama to Hiroshima, making him the first sitting US president to visit the site of the atomic bomb attack, as among his proudest achievements.

Among his greatest disappointments, he said, was his inability to bring home Japanese people kidnapped by North Korea decades ago.

Tributes poured in from leaders around the world, with Indian Prime Minister Narendra Modi praising Abe’s “wise leadership” for strengthening ties and wishing him a speedy recovery, while the Kremlin hailed Abe’s “invaluable contribution” to relations.

A spokesman for the presidential Blue House in Seoul praised Abe for his “many meaningful achievements”.

China was more circumspect, with a foreign ministry spokesman saying the resignation was an “internal affair” on which it would not comment.

US President Donald Trump paid his “highest respect” to “a very great friend of mine.”

Abe’s time in office will end with his government facing slumping approval ratings over its handling of the coronavirus crisis, including a U-turn on stimulus and a widely-mocked policy to issue cloth face masks to every household.

Some in Tokyo were quick to criticise Abe after his resignation was announced.

“He has been in the prime minister’s office way too long. I don’t want to see his face honestly. Seven years and eight months, too long!” said Tetsuya Daimon, 54.

Abe’s departure also means he will not be in charge as the country prepares to host the coronavirus-delayed Tokyo Olympics next year.