Taipan has been a popular Patong nightclub now for over 23 years. Its events manager, Mark Cameron, kindly invited me to what was to be the first comedy show there for three years because of the COVID pandemic. 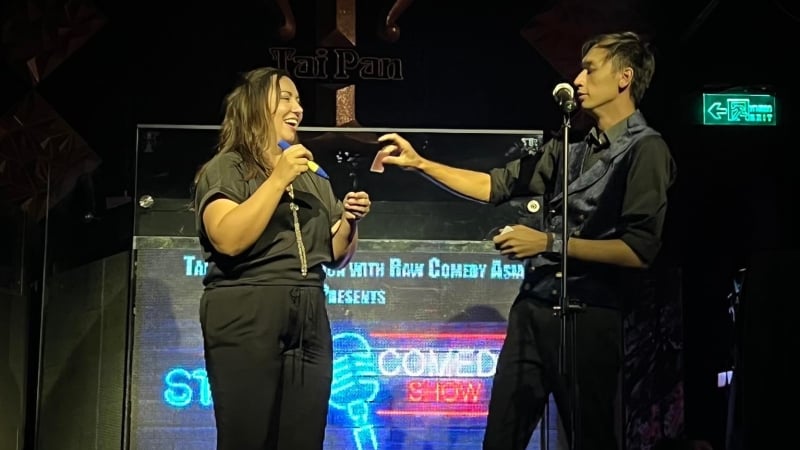 Mark introduced me to Chris Raufeisen, comedian-in-charge and a founder of Raw Comedy Asia. I also met four other comedians from Bangkok that Chris had brought down with him, Harvey Walden, Ric Diez, Charles Le French and Ider-Od, all with Asian family connections.

When I met them, I guessed right away the two main questions going through these performers’ minds: What’s the Patong audience like, and what will make them laugh? Or not laugh…

Not laugh? That’s because comics like Monty Python’s John Cleese are saying comedy today is under a growing threat from ‘woke warriors’ ‒ those obsessed with racism and gender issues. Comedian Rowan Atkinson (aka Mr Bean) went as far as describing them as like “a medieval mob, roaming around, looking for heretics to burn”. Indeed, I was shocked to read recently that a UK comedian had been called in by the police after a complaint made after one of his shows. He had to write a statement, but luckily no further action was taken.

Happily, this being the Land of Smiles, these entertainers were unlikely to have a police interview after the show. But are younger people today more easily offended? I asked Chris if he worried about it, and he dismissed it, saying, “To be a comedian, you need to be comfortable taking risks.” However, he was worried enough to ask me if I thought he could get away with a tsunami joke, going on to tell the gag without any problems.

Then there are the changes in society that are increasingly multicultural and multinational. When I was a kid watching comedy on TV, the comedians had it easy – the UK then was a pretty homogenous culture and easy to understand. Migration since has changed all that, making it more difficult to tailor jokes to an audience. That’s especially true for somewhere as international as Phuket, but comics have to try if they are to do their job, get that laugh and enrich our lives.

So I was not surprised to find the show had a lot of jokes about sex. After all, except for the eternally celibate, it’s something we humans all have in common and can laugh about! Predictably, such jokes soon had the audience rolling about with laughter. However, one performer clearly struggled while telling a joke about Korean intonation of words. It would have been easier for him to stick to sex as a theme, but that lode was in danger of being exhausted.

Hopefully, it can be seen that such comedians today need to be clever, flexible, think quickly on their feet and be skilled at handling an internationally diverse audience. For only then can they achieve Mark’s aim and “bring some laughter back to Phuket after these past two years”.

Mark cheerfully told me after the show, “It was a roaring success, and I’ve now been given the green light to do such shows on a regular, monthly basis. This is great news as I can now go search for more talented and seasoned professionals to bring to Phuket.”

So hats off to Mark and Taipan for relaunching comedy here. And thanks too to those five brave comedians for coming down here to entertain us – you were definitely all good for a laugh!

Andy Tong Dee is a local expat and musician. He would be interested in hearing from anyone interested in starting out as a comedian here. Check out his website at www.phuketmusicscene.com