It’s a ball in Patong with sports tourism triple-header

It’s a ball in Patong with sports tourism triple-header

ALL SPORTS: Patong Beach hosted a beach football tournament last weekend (Apr 29 – May 1), the second in a series of three sports-themed competitions being staged in the area aimed at boosting tourism, revitalising the local economy and promoting a healthier, more active lifestyle among local residents.

FootballFutsal
By The Phuket News 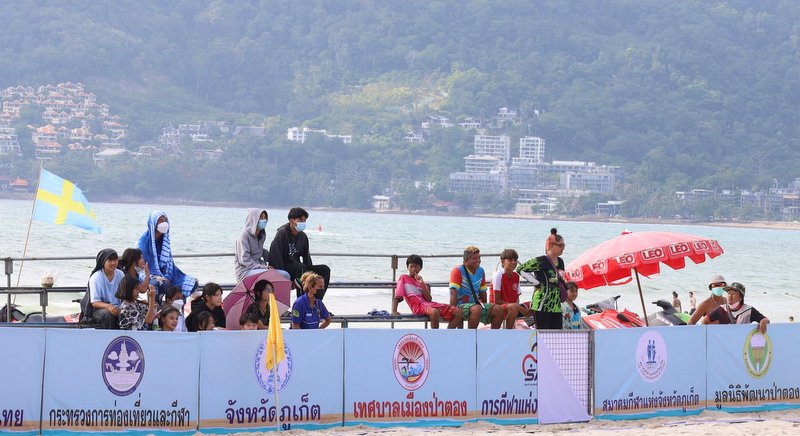 The triple-header, organised by the Phuket Provincial Office of Tourism and Sports, sees the sports of woodball, beach football and futsal being played across three separate weekends at one of the island’s most popular destinations.

Last Saturday and Sunday a total of 24 male and female 5-a-side teams took part in the “Phuket Soccer Beach” tournament at a temporary pitch constructed on Patong Beach. The teams were made up of players from all age groups from the general public, with play during the two-day tournament running from 10am until 10pm.

The opening ceremony, held at the temporary pitch on Patong beach around 4:30pm last Friday, was presided over by the President of the Phuket Sports Association, Thammawat Wongchareonyot.

Mr Amnuay explained that the three-event sporting initiative is part of an economic stimulation and tourism revitalisation project overseen by Phuket Governor Narong Woonciew that strives to use sports to help boost the local economy which is still reeling from the fallout of the COVID-19 pandemic.

Ms Chantana explained that the project had been partially funded by budget from the ‘Phuket Provide’ initiative which is tasked with organising sports-themed events to stimulate the local economy and boost local tourism, specifically within the Patong area on this occasion.

The activities it focuses on as part of this remit includes both popular and more traditional sports which are designed to encourage children and the elderly to exercise and pursue a healthly lifestyle, she added.

The “Woodball Thailand Championship” took place on Apr 22-24 and saw teams of all ages participating on the grass courts at Laem Petch football field opposite Loma Park in Patong. Woodball is a game similar to croquet which is extremely popular among all age groups in Thailand.

The third and final event is the “Phuket Soccer Futsal” competition which is taking place today and tomorrow (May 7-8) on the clay courts at Laem Petch football field in Patong between 10am and 10pm.

Spectators are welcome to come along and view the action this weekend and entry is free. All COVID-19 health and safety protocols are being adhered to, officials confirmed.