PHUKET: Measures adopted by Phuket officials to contain the spread of COVID-19 are to be extended until Aug 31 under a new order issued by the Phuket Governor.

CoronavirusCOVID-19ChinesehealthVaccineimmigration
By The Phuket News 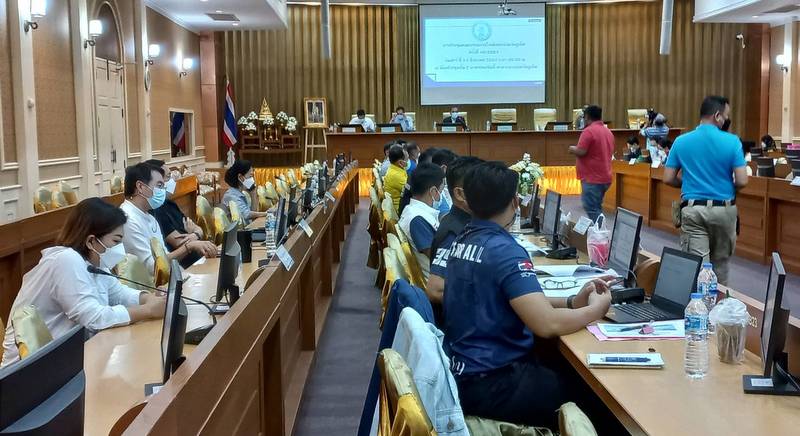 The provincial order was issued by Phuket Governor Narong Woonciew and posted just before 10pm last night (Aug 14). The order will be in effect from Aug 17 to 31.

Essentially, all restrictions remain in place as per the previous order including schools closed until the end of the month, ‘risky’ venues being banned from serving alcohol and limitations on social gatherings in private residences and groups of no more than 50 people in public spaces.

The only real amendment to the pre-exisiting order is that residents of Phuket, those that work here permanently and tourists under the Sandbox scheme will now be allowed entry.

Phuket Vice Governor Piyapong Choowong explained the key measures and other information mentioned in the order after a Communicable Disease Committee meeting in the afternoon, as follows:

“New exemptions will now apply for people who are registered as Phuket residents with a Phuket listed address or people who work permanently in Phuket,” said V/G Piyapong.

“This group of people can enter the island from Aug 17 after the measures come into effect. However, they still need to be fully vaccinated and test negative by RT-PCR or antigen rapid test within 72 hours before arriving in Phuket.”

“People who work permanently in Phuket must present a confirmation document, issued by the company they work for, to officers at the border checkpoint.

“The exemption will also include tourists under the Phuket Sandbox scheme. Tourists who complete their mandatory 14-day stay in Phuket can go out and return to Phuket. They must present the necessary documents to officers to prove that they are tourists under the scheme.

“We are also discussing measures which will see antigen test booths at the checkpoint to facilitate arrivals,” V/G Piyapong added.

“Otherwise, the core of the order will remain the same meaning that all arrivals of all kinds of vehicles from the mainland are to be refused entry to Phuket,” V/Gov Piyapong said.

There are exemptions to this rule which allows people conducting essential or urgent business onto the island as follows:

The checkpoint onto Phuket will remain closed to all traffic except for emergencies from 11pm to 4am each night.

The closure of venues deemed ‘risky’ across the island will remain the same as Phuket is still classified as a orange-zone province. V/G Piyapog confirmed that Phuket will continue to follow measures set down by the CCSA.

“Even though the Communicable Disease Committee discussed the possibility of lifting the ban of alcohol consumption in restaurants, we did not agree to lift the measure,” he said.

“The serving and consumption of alcoholic beverages in restaurants and hotels will remain banned,” he repeated.

“So far, we have recorded many infected cases among migrant workers and they will now not be permitted to enter or leave the province,” V/G Piyapong said.

“As such, we have two provincial orders specifically for them. One applies to those who work on land, and the other for those who work at sea on fishing boats.

“For those who work on land, we will give authority to each District Chief to manage the workers’ camps because some decisions need to be made urgently.

"Regular ATK or RT-PCR testing will be conducted and should the rate of infection rise above 10% of the total population of the camp then it will be placed into a bubble and seal lockdown scenario.

“The District Chiefs will have direct ongoing contact with the camp managers in their areas.

“For workers at sea, we will apply the bubble and seal measure to fishing boats meaning the boat must not be moved except for when going to fish. Workers who are considered as high-risk people must stay only on their boats.

“The Phuket Fishery Office will be responsible for managing the workers and will have a team of ‘vessel managers’ to contact and share information,” V/G Piyapong concluded.