FORMULA ONE: Lewis Hamilton’s record 92nd victory was won in emphatic fashion, but his wasn’t the only example of individual brilliance at the Portuguese Grand Prix. 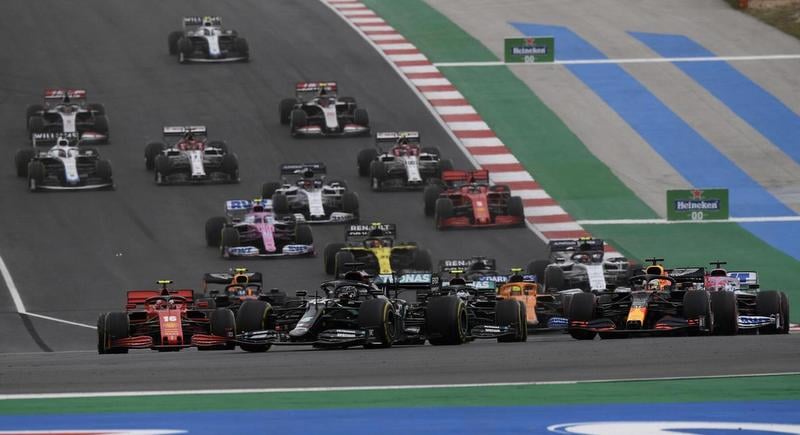 Although the race plaudits rest with Hamilton, the tricky conditions at Portimão highlighted other displays of individual brilliance. Photo: AFP.

Having equalled Michael Schumacher’s benchmark of 91 grand prix victories two weeks ago, Lewis Hamilton had to wait only one race more to eclipse the German giant and claim the record for himself.

It was only a matter for time for Hamilton to seal the deal, not least because he wields the Mercedes W11, the fastest package built by arguably the best team ever to have raced.

But the car is only part of the story, and the story of the Portuguese Grand Prix underlines that Hamilton’s legacy is every bit man as it is machine.

At 25.5 seconds Hamilton’s Portimão win stands as the biggest margin of the season to date. Only his triumph in Spain comes close, when teammate Valtteri Bottas was waylaid by a bad start from which he was unable to recover.

In Portugal, however, Bottas was not just a victory contender but indeed the early race leader thanks to a deft touch in greasy conditions that seemed beyond even Hamilton’s renowned low-grip ability. With strategic variability limited and in matching machinery, it ought to have been Valtteri’s race to lose.

But Hamilton, as he so often does, proved the difference.

“I felt through the race that I was learning, lap on lap, more about the circuit,” he recounted afterwards. “I was trying lots of different lines and discovering new lines that worked well.”

It took only until lap 20 for him to zip past Bottas, and from then there was no slowing him. The gap grew to 10 seconds after another 20 laps and ballooned to the full 25 seconds at the flag.

“I don’t know why I didn’t have the pace today,” Bottas accepted. “I was pushing hard but couldn’t go faster.”

The seeds of Hamilton’s dominant victory were sown on Friday, when teams and drivers lost most of the crucial second practice session to red flags. Having never raced at the Algarve circuit and with the tarmac still oily from its recent resurfacing - not to mention the unpredictable weather - the lack of practice meant it would be up to the drivers on race day to judge conditions, manage the tyres and maximise their performance on gut instinct rather than data and modelling.

This wasn’t a race for constructors; it was a race for drivers, and by dominating his 92nd victory Hamilton demonstrated why he deserves to be considered among the greatest of them all.

And though the race plaudits rest with Lewis, the tricky conditions highlighted other displays of individual brilliance.

Max Verstappen wrung the neck of his car to finish third, just nine seconds behind Bottas. His Red Bull Racing teammate, Alex Albon, finished a lapped 12th in another disappointing afternoon that did little to boost his chances of securing a 2021 contract.

Not for the first time Charles Leclerc turned in a machinery-beating drive to finish fourth while Sebastian Vettel managed a mere 10th place in the sister car. And Pierre Gasly was sensational managing his tyres to claim fifth while teammate Daniil Kvyat trailed home last.

And among these standout young drivers a veteran Sergio Perez recovered from dead last on lap two to finish an incredible seventh while his teammate copped two penalties and retired early.

F1 hopes we’ll get more displays of raw driving ability under new rules in 2022. Until then races like the Portuguese Grand Prix remind us what we have to gain when the drivers take centre stage.