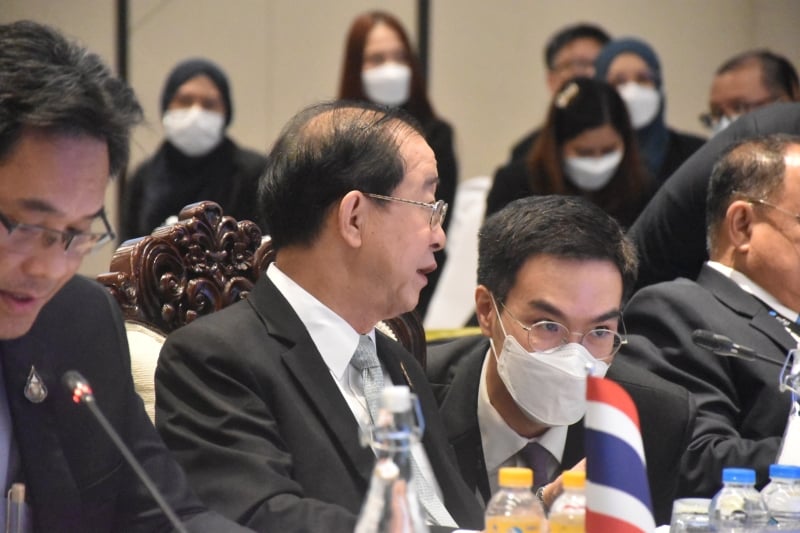 The event, at Saii Laguna Phuket, began on Tuesday (Sept 13) with talks held between the participating nations throughout the week.

Also present were Ahmed M Saeed, Vice President of the Asian Development Bank; Chze Cheen Lim, Director of the ASEAN Connectivity Division at the ASEAN Secretariat Office; and Danucha Pichayanan, Secretary-General of the Office of the National Economic and Social Development Council (NESDB) in Thailand.

Mr Arkhom praised the progress made during the international economic conference “to develop a sharp edge network to connect seamlessly., improve rules to support each other, take into account environmental sustainability and upgrading the potential of workers, which is an important factor in the development of the sub-region”.

Under the Physical Connectivity Projects (PCPs), 36 projects with a total value of over US$57 billion (approximately B2.1 trillion) were agreed to, including construction of a road linking the Sadao and Bukit Kayuhitam with a customs checkpoint; construction of the second Kolok River Bridge (Su-ngai Kolok-Rantao Panyang) and a new bridge between Tak Bai and Bangalan Kubo; and improving the motorway from Hat Yai to Sadao.

Other projects discussed included Phuket Airport Development Phase 2 and the construction of the double-track railway from Hat Yai to Padang Besar.

The three countries signed a Memorandum of Understanding on rubber industry cooperation. For decades, Thailand has been the world’s biggest producer of rubber, growing 35% of the world’s natural rubber supply in 2019. Malaysia and Indonesia are both also vital producers of rubber on the global market.

“Thailand’s interests in holding this meeting are to facilitate private investors to invest in the rubber, palm oil and halal food industries. The Memorandum of Understanding on the Rubber City Project and the Rubber Industry Cooperation in the IMT-GT sub-region will result in facilitating business operations. and distribution of income to rubber farmers,” Mr Arkhom noted.

The IMT-GT event this week also saw India become the first country outside the tripartite to join the IMT-GT Development Partnership. The three countries will jointly formulate an action plan with India on key goals based on specialised knowledge.

“The MoU also aims to expand cooperation with the Asian Development Bank, the ASEAN Secretariat and other development partners to create strong economic growth of the sub-region together,” Mr Arkhom said.

“This will be under Vision 2036, which will be the framework for the development of the IMT-GT subregion with a focus on energy and food security, digital transformation development of special economic zones, industrial development, cooperation with development partners and all sectors, sustainable tourism driven by the private sector, and balanced growth while reducing inequality and developing more efficient operating mechanisms,” Mr Arkhom explained.

“The results of the IMT-GT Business Council have supported the Instructor Training Program to elevate community tourism into the digital economy,” Mr Arkhom said.

“This is a project that benefits SME tourism entrepreneurs by using digital technology as a management aid, and will strengthen SME entrepreneurs to turn around the tourism business sector,” he said.

Mr Arkhom called for three major developments to be driven forward to help develop the economy, as follows:

Indonesia will host the 29th IMT-GT Ministerial Meeting, IMT-GT Roadmap and other related meetings in 2023.