PHUKET: Police have launched a manhunt for the shrimp vendor who shot two people dead and left three injured after he opened fire at a fresh market in Phuket Town yesterday (Jan 7). 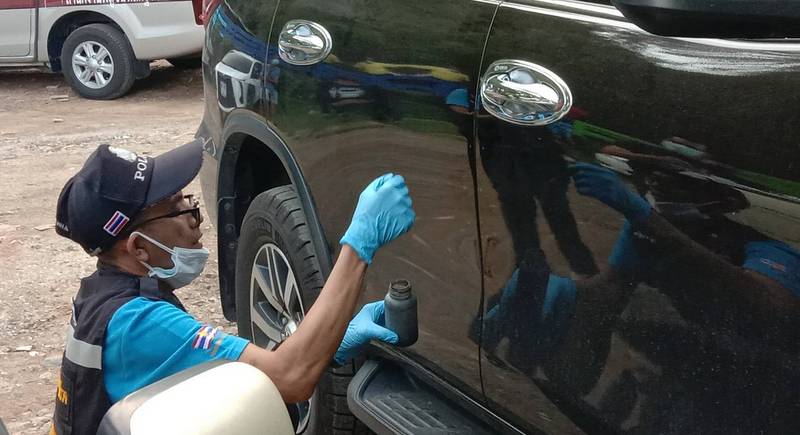 The wanted man, 47-year-old Maneenop Meethong, from Songkhla, had informed Phuket City Police yesterday afteroon of his intention to surrender for the shooting yet he has so far failed to do so.

Sarayuth Thinsathan and Toi Limpananurak, were fatally shot by Maneenop in an altercation at the fresh market yesterday morning. Three others who were caught up in the incident remain under hospital care.

Police confirmed today that Maneenop had fled the scene and CCTV footage showed him escaping on a longtail boat to Coconut Island, where they continue their search for him.

They added that around 4pm yesterday the former wife of Maneenop, 48-year-old Kanchana Junthong had provided further details on how yesterday’s shooting came about.

According to Ms Kanchana a customer entered their shop early yesterday morning inquring about the cost per kilogram of shrimp. Maneenop responded the price B300 which the customer argued was too high. A heated argument ensued with the customer cursing Maneenop several times, which is when Maneenop realised the customer was actually a fellow vendor.

Maneenop then left the scene and headed home, returning to the market shorty afterwards. Ms Kanchana said she then heard three or four shots before he ex-husband fled in his black Toyota Fortuner, registration number Kor-1631 Phuket.

Police tracked Maneenop’s movements via CCTV to the Laem Hin Pier in Koh Kaew where they discovered his vehicle parked and locked but were able to utilise forensics to determine it was Maneenop’s by identifying his fingerprints on the car.

The investigating officer, Pol Lt. Col. Ying Nujaree, confirmed a forklift had been called to remove the vehicle and take it to Phuket Town Police Station.

Further investigation by CCTV footage at the pier revealed Maneenop had boarded a longtail boat owned by Chaturong Chaikul, 35, and made the crossing to Coconut Island.

At time of press, the pursuit of Maneenop continues, police confirmed.