WORLD: Thousands of police will enforce a ban on protests in Hong Kong today (June 4) for the Tiananmen Square crackdown anniversary, a traditional day of pro-democracy people power that China has made clear it will no longer tolerate. 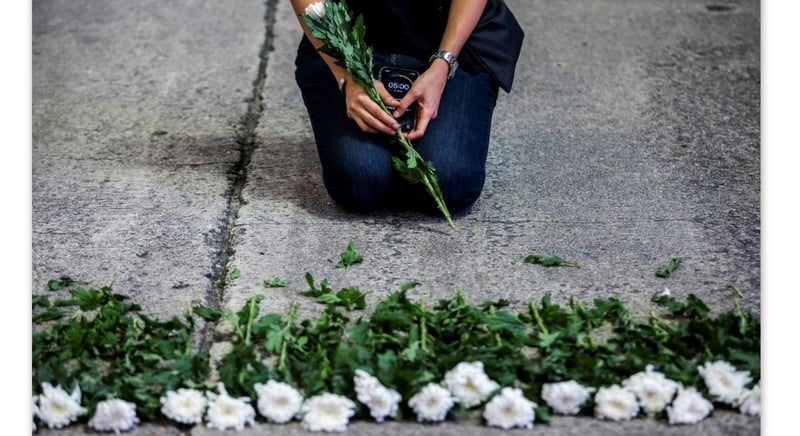 An artist in Hong Kong mourns the victims of China’s deadly Tiananmen Square crackdown after authorities banned an annual vigil and vowed to stamp out any protests on the June 4 anniversary. Photo: AFP.

Discussion of Beijing’s decision to use tanks and troops against peaceful democracy protests on June 4, 1989 is all but forbidden on the mainland.

And Hong Kong’s traditional status as the only place in China where large-scale commemorations are still allowed looks to be coming to an end.

For more than three decades, huge crowds have gathered in the city’s Victoria Park to hold an emotional candlelight vigil to remember those killed and to call on China to embrace democracy.

Authorities banned this year’s gathering citing the coronavirus pandemic - although Hong Kong has not recorded an untraceable local transmission in more than a month.

Police say that thousands of officers will be on standby to halt any “unlawful assemblies” while officials have also warned that a sweeping new national security law could be wielded against Tiananmen mourners.

While last year’s vigil was also denied permission because of the pandemic, thousands simply defied the ban.

But much has changed in Hong Kong over the last year as authorities seek to snuff out the city’s pro-democracy movement using the security law to criminalise much dissent.

Most of the city’s most prominent democracy figures - many of whom would organise and attend the annual Tiananmen vigils - are in jail, have been arrested or have fled overseas.

This morning, four people identified themselves as plainclothes police officers to prominent democracy activist Chow Hang-tung outside her office building in the city’s Central district and said they were arresting her, according to an AFP reporter on the scene.

She was placed in a black saloon car and driven away.

The threat of mass arrests has forced those who would normally attend the vigil to think creatively.

Activists have called on residents to light candles in their own homes or neighbourhoods come this evening, or post commemoration messages on social media.

One campaign has called for Hong Kongers to write the numbers 6 and 4 - representing June 4 - on light switches at home.

“A regime can ban an assembly but it can never ban the indelible grievances in people’s hearts,” Lee Cheuk-yan, a now jailed democracy activist, wrote in a message published on his Facebook page yesterday.

“I hope everyone can find your own way to light a candle by the window, on the road, wherever that can be seen by others, to continue our mourning,” he added.

Much like the initial generation of Tiananmen survivors who fled abroad three decades ago, many Hong Kong democracy figures have chosen self-exile and plan to lead their own commemorations overseas.

Vigils are planned in cities like Tokyo, Sydney, Taipei, London, Berlin and Washington.

“I hope everyone can all pass on the history and truth of the June 4 massacre and the democratic movement in 1989 to the next generation by safe means,” Nathan Law, a former student leader who fled to Britain last year, wrote on Facebook.

In mainland China, the Tiananmen anniversary is usually marked with a dramatic increase in online censorship and the square in Beijing being cordoned off.

It has transformed the city’s once freewheeling political landscape.

More than 100 pro-democracy figures have been arrested under the new law, mostly for political views and speech.

Most are denied bail and face up to life in prison if convicted.

Pro-Beijing politicians have suggested that calls to “End one party rule” and “Bring democracy to China” - both common chants at Tiananmen vigils - could now be deemed subversion, one of the national security crimes in the broadly worded law.

The security legislation has been combined with a new campaign dubbed “Patriots rule Hong Kong” aimed at purging anyone perceived to be disloyal from public office.

Critics, including many western governments, say the crackdown has shredded Beijing’s promise that Hong Kong could maintain key freedoms after its 1997 handover from Britain to China.