PHUKET: The South West Meteorological Center based in Phuket has issued a weather warning advising all small boats to stay ashore as heavy weather along the Andaman coast is expected to continue through Saturday

weathermarineSafety
By The Phuket News heavy weather is forecast to continue throughout this week. Photo: Khao Phuket / file 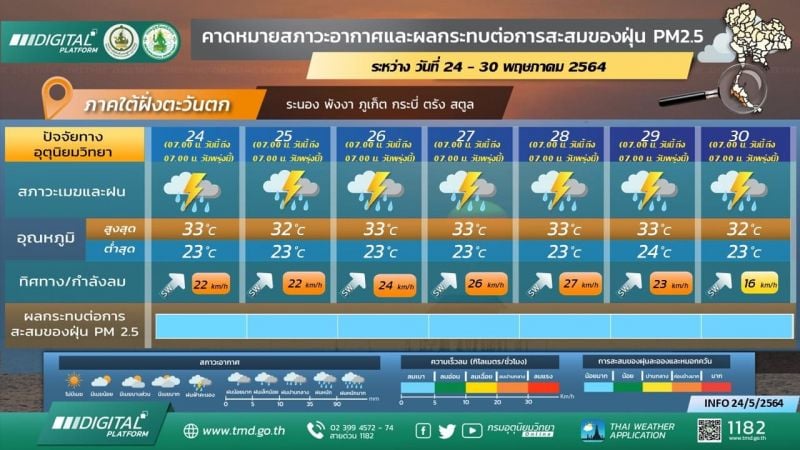 heavy weather is forecast to continue throughout this week. Image: Phuket MET In its forecast issued this morning (May 24), winds off the coast are to average 22-24km/h, with gusts rising to 45km/h on Friday before easing on Sunday (May 30).

“In addition, the strong southwest monsoon prevails over the South, the west coast and the Andaman Sea. This causes more rain and heavy to very heavy rain in the southwest in some areas of Ranong, Phang Nga, Phuket, Krabi, Trang and Satun,” the warning noted.

As such, waves in the Andaman Sea are stronger, rising to two to three metres high, and even higher during thunderstorms, the notice warned.

People were asked to follow announcements from the Meteorological Department closely.

The weather warning followed winds across Phuket reaching in excess of 40km/h with rain lashing many parts of the island on Saturday (May 22). The weather monitoring station near Phuket airport recorded more than 28mm of rainfall during the storm.

The Phuket Marine Office yesterday issued its own weather warning of heavy to very heavy rain in some areas of Ranong, Phang Nga, Phuket, Krabi, Trang and Satun.

Nachaphong Pranit, Acting Director of the Phuket Marine Office, also warned of strong waves rising above three metres during thunderstorms and called for all small boats to stay ashore.

All boat operators were asked to be “careful in their navigation”.

“Small boats should not leave the shore from May 23 and check the ship’s readiness,” Mr Nachaphong ordered.

All boat operators were ordered to ensure that all life-saving emergency equipment was available and ready for use.