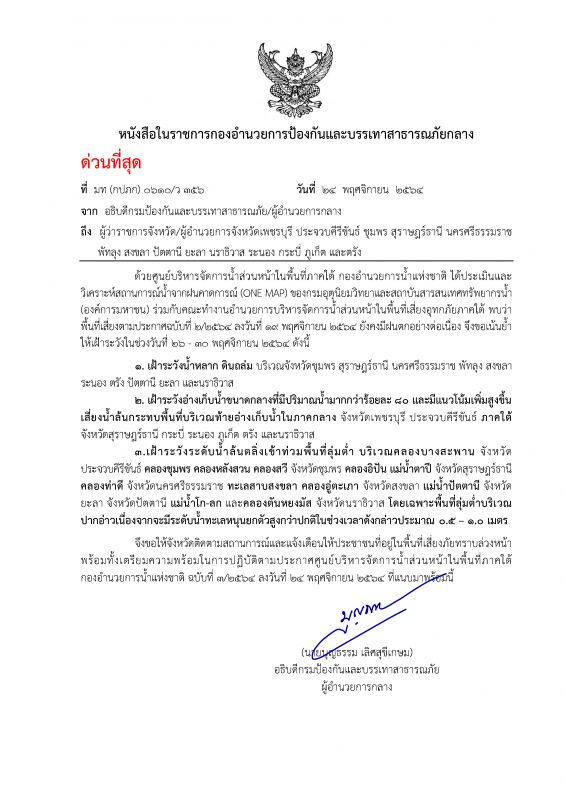 The weather advisory by the Phuket MET noted that the heavy rainfall predicted to afflict the southern provinces on the mainland is heading toward the Andaman Sea, and will cross the coastal provinces of Phuket, Phang Nga, Trang and Satun.

The TMD weather warning for the South issued earlier today came as Nachaibuntham Lertsukhikasem, Director-General of the Department of Disaster Prevention and Mitigation (DDPM), issued a formal notice warning areas at risk of flooding, landslides, and overflowing reservoirs and overflowing river banks.

Officials in the at-risk areas are to monitor heavy rainfall in their areas, prepare to respond to any emergencies and keep the public informed of any danger in their areas, he added.

“A high pressure area with relatively strong cold air masses is covering upper Thailand and the South China Sea. As a result, the northeast monsoon that prevails over the Gulf of Thailand and the South will be quite strong. During November 24 - 26, 2021, heavy rain over the east coast in many areas and very heavy rain in some areas [are forecast]. This may cause flash floods, wild water flows and water can overflow [canal and reservoir] banks,” he said.