BANGKOK: Public Health Minister Anutin Charnvirakul does not expect a sudden influx of Chinese tourists or see a need for any special arrival rules for them. 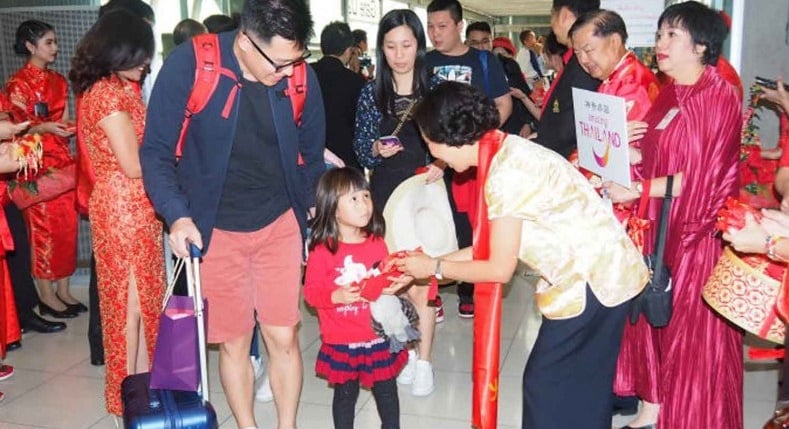 Visitors from China are welcomed at Suvarnabhumi airport during the Lunar New Year in February 2019 - before the COVID-19 epidemic. Photo: Sutthiwit Chayutworakan

Anutin, also a deputy prime minister, said today (Dec 29) that the number of Chinese arrivals would be limited initially because the Chinese government still imposed travel conditions including RT-PCR tests for COVID-19 for both inbound and outbound travellers.

“I would not like any speculation of a Chinese influx because that would worry people. I believe they will arrive gradually,” he said.

Following the Chinese government’s decision to ease COVID-19 controls, officials from the Department of Disease Control, the Ministry of Tourism and Sports and the Ministry of Transport had met every day to discuss appropriate measures, Anutin said.

He said the government would not require Chinese visitors to take a test for COVID-19 before or after they arrive, reports the Bangkok Post.

Most Chinese received at least three doses of COVID-19 vaccine and also developed antibodies from COVID-19 infection. In addition, COVID-19 strains detected in China and Thailand were the same, Anutin said.

Chinese visitors would only have to comply with relevant measures imposed on all arrivals, that was to buy health insurance, he said.

Officials planned to give AstraZeneca vaccines to Chinese visitors on a voluntary basis if they had received three shots of Sinovac and wanted to pay for a booster jab of AstraZeneca, Anutin said.

Local people could prepare by ensuring they have had at least four doses of COVID-19 vaccine, while businesses could enforce effective disease controls in their premises, he said.

“Disease control measures will focus not only on public health but also economic benefits,” Anutin said.

“We must consider economic matters… Many Thai people have been vaccinated. There are medicines and hospitals for infected people. Arrivals will not pose any serious risk. We will treat Chinese visitors like those arriving from other countries,” the health minister said.

Tourism Authority of Thailand governor Yuthasak Supasorn said today he expected Chinese tourists would start arriving from Jan 5 and predicted about 300,000 in the first quarter of next year, which would help the tourism sector during the low season.

The authority had now raised its arivals target for next year from 20 million to 25mn, but anticipated revenue from tourism remained unchanged at B2.4 trillion, he said.

@JohnC, funny reaction. And 100% presumingly wrong. I don't hide in my house, with family quite ...(Read More)