GPS used to keep an eye on Police

GPS used to keep an eye on Police

THAILAND: GPS (global positioning system) technology is being introduced to tackle cases of police officers absconding from their patrols of crime-prone areas. 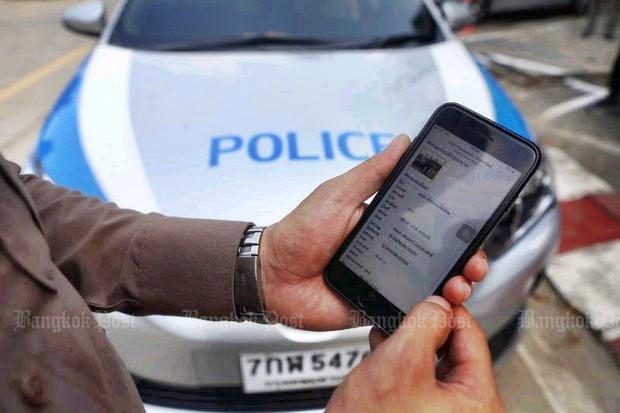 A new GPS-based system developed for the Crime Suppression Division tracks the movement of on-duty CSD police to prevent errant officers from skipping their duties. It now is being implemented on a trial basis. Photo: Bangkok Post

Special "red boxes" are often installed in areas that need an increased level of policing and officers must scan a QR code housed within to prove they were physically present on patrol.

However, some wily officers have found a way around it by taking a picture of the QR code and scanning that from home, or elsewhere, to give the impression they have completed their rounds.

The problem was brought to the attention of the Crime Suppression Division (CSD), who have now brought in real-time GPS tracking technology to keep tabs on officers on their beat.

The technology was trialled in Bangkok last week as a replacement for the red boxes.

The CSD expect it will be progressively implemented not only in crime hot spots, but in all police precincts in the near future.

The GPS system comes in the form of a smartphone application that must be downloaded by officers on regular patrols, or who are assigned to conduct surveillance operations.

Once the officer arrives at the designated location, he or she must open the application and check in by tapping a location identifier icon, according to Pol Maj Gen Jirabhop Bhuridej, the CSD commander.

In some areas, the patrol must be carried out at particular times of day. For example, in Soi Lat Phrao 101 where statistics show the crime rate usually peaks between 7pm and 8pm, the check-in must occur during these times.

In the cases of people who require police protection, the CSD's new system will automatically send an SMS to the person in question to let them know that an officer has arrived and "checked in" outside their home.

Officers' movements while on patrol are then recorded and monitored live at the CSD headquarters. "The patrol work is monitored in real time so no one will be able to lie to his superior any more," said Pol Maj Gen Jirabhop.

The CSD officers taking part in the pilot project are required to be within a 50-metre radius of the check-in point to activate the check-in icon on their smartphones. They then have to fill out details of their patrol duty in the app.

Information the officers must give includes whether the security situation is rated as normal or not, and if they have talked to people on the street around the check-in location to get a clearer picture of any criminal activity in the area.

After each conversation in the area, whether with a suspect or a member of the public, officers are required to obtain the person's name and take their photo via the app should these details be needed for evidence.

Security officers who head patrol teams must then submit a report to their superiors, which the CSD will also receive a copy of, at the end of each shift.

The report compiles details of the assignment, the number of officers used, the distance covered and the pictures taken during the patrol.

"I've stressed the importance of stopping patrol vehicles and talking to the people, as this is a way of gaining a rapport with the community.

"It's the people on the ground who will lend a helping hand when it comes to security surveillance," said Pol Maj Gen Jirabhop.

In the next phase of the project, a "Real Time Crime Centre” will be established to manage police patrols and crime reports nationwide.

The centre will coordinate across precincts to prevent any overlap of work and also compare the relative productivity of each division's patrol work, he said.

There are 1,482 police stations nationwide and each now utilises at least 30 red security check-in boxes, which altogether cost the Royal Thai Police 11.1 million baht to buy and install, not to mention the costs of the check-in book placed in the box. It is not known how well that system has worked to date.

So far, officers have responded positively to the new system and there have been no bugs or teething problems reported with the check-in app, he said.

After the pilot project, the CSD is keen for the Royal Thai Police to roll out the new system for use by all police stations nationwide, he added.