PHUKET: One long-term Phuket resident is intent on driving positive change across the island – but it has nothing to do with the popular American’s renowned golf prowess.

charitydeathhealth
By The Phuket News 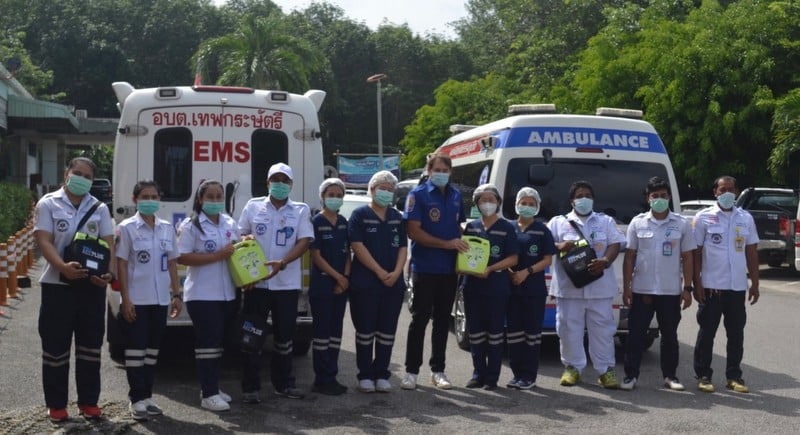 The inside of Ple’s ambulance who is the head of the Kusoldhsarm division of the Cherng Talay area and who paid for the ambulance himself. Photo: Jeff Craig

Instead Jeff Craig, who teaches at Laguna Golf Club, has been helping fund and provide much needed medical equipment for emergency services across the island.

Jeff will be well known to many here, particularly those of a golfing persuasion. He first moved here from his native US in 1995 to teach golf at the then newly opened Banyan Tree golf club, now Laguna Golf Phuket, where he is currently based.

A trained paramedic, it quickly became evident to Jeff back then that emergency medical systems (EMS) across the island were somewhat lacking. He volunteered at Thalang Hospital when he had the time and became acquainted with several people from the Kusoldhsarm team.

“At that time there were about 15 full-time employees who lived at the Kusoldhsarm temple in Phuket town,” Jeff told The Phuket News.

“We had two pick-up trucks that pretty much serviced the whole island and basically, no medical equipment. Over the years we were able to procure more equipment and after the tsunami, with the donations, we were able to buy some proper ambulances.”

After a five-year spell back in the US and a successful stint managing a golf course in Yangon, Jeff returned to Phuket’s shores last October.

“When I got back here I decided to dedicate myself not only to teaching golf at Laguna but also improving the emergency medical system even more,” he explained.

It is an unfortunate but widely acknowledged fact that any cardiac arrests that occur out of hospital do not end well, even in countries with sufficient EMS systems and funding in place, such as the US, UK and Australia. With a distinct shortage of funding in Thailand, the EMS has therefore suffered from not receiving enough quality equipment.

“Since we moved back in early October, I have been to eight different cardiac arrest incidents and needless to say they have not gone well,” commented Jeff.

“The emergency services and hospitals here very much do the best they can with what they have but the principal issue is that they don’t have the defibrillators that deliver the critical shock to a heart that is just going into cardiac arrest,” he added.

Jeff firmly believed that a cardiopulmonary resuscitation (CPR) he helped administer late last year could have had a better outcome if he had access to his own automated external defibrillator (AED) although the high costs associated were prohibitive.

Shortly after, he was playing golf with some long time Phuket friends when he mentioned the incident and his desire to help raise funds to enable acquisition of the appropriate equipment.

“They were more than happy to not only to sponsor an AED for me, but also for the several teams of the Thalang district, which was fantastic news,” said Jeff.

“Whereas ideally I would like every Phuket ambulance to have an AED, it was a case of prioritsing the ones I felt could benefit most immediately,” he added.

He decided to provide one to Thalang Hosptial who required a portable AED to complement the cardiac monitor that is affixed to the inside of their truck.

Song Ya EMS received one due to the fact that their machine was older and not reliable and they service a large area.

One was provided to Kusoldhsarm Maung Mai, an experienced and very responsible team who consistently receive a very high call volume and are a substantial distance from the hospital.

The fourth device was donated to a gentleman named Ple who is the head of the Kusoldhsarm division of the Cherng Talay area and has his own ambulance which he paid for himself.

“The only thing he was really lacking was an AED,” said Jeff. “I had been hoping to get him one for months and now he is all set.”

Jeff also retained a device himself which he installed in his truck and that was used at a cardiac arrest incident in Cherng Talay just a week later. Unfortunately, efforts were unsuccessful but it gave the person a much higher chance of survival.

“I am very thankful for the three men that donated the B360,000,” commented Jeff.

“I put in some of my own money forward to pay for extra defib pads, batteries and a few bits and pieces of medical equipment for the Cherng Talay subdistrict Or Bor Tor as well.

“It will be a long road ahead to really get these ambulances and services up to a good level but this was a great start."