PHUKET: An 84-year-old German expat who had lived in Phuket for years on retirement was found dead of suspected heart attack in his car at the Phuket International Airport parking lot yesterday afternoon (Jan 15). 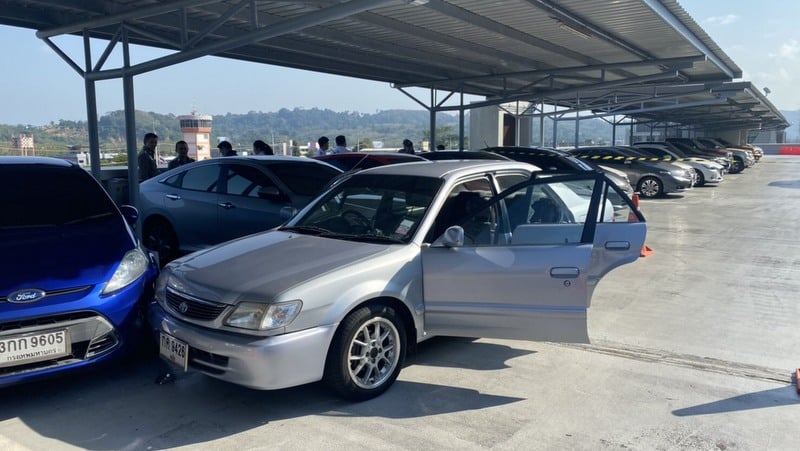 Mr Krinner was found collapsed behind the wheel of his car at the airport car park. Photo: Eakkapop Thongtub

Lt Sira Lertthaisong of the Sakoo Police was informed of the incident by airport police at 2:50pm.

Lt Sira said that the German expat, identified by his Thai driving licence as Johann Ludwig Krinner, a resident of Rawai, was found by a staffer from a duty free store at about 2.40pm.

Mr Krinner’s car had rolled into a parked car on the sixth floor of the parking lot, drawing the staffer’s attention, Lt Sira explained.

With Mr Krinner was not responding to attempts by the staffer to wake him, an emergency medical team was called to the scene. Also unable to rouse Mr Krinner, the medical team were forced to break the back left door window to enter the car.

“His body was taken to Thalang Hospital,” he said.

Mr Krinner and his wife lived together in Rawai, Lt Sira noted.

His wife has been informed of her husband’s demise, he added.

“He came to pick up some friends,” Lt Sira said.

At 2.09pm the camera footage showed Mr Krinner’s car rolling into the parked car on the sixth floor.

Mr Krinner was alone in the car, Lt Sira noted.

“I believe he might have died from a heart attack, but I am still waiting for the hospital to confirm the cause of his death.” Lt Sira added.