Gerald ‘Ged’ Hogg has written eight books since he retired to Thailand in 2017. While many older Westerners spend anxious hours wondering what to do with their newly acquired freedoms, Ged spends his time exploring life in Southern Thailand and writing travel books, his autobiography and has completed his first two mystery novels about the adventures of Thai Police Lieutenant Chai Son Sinuan, who battles both violent crime and police corruption. 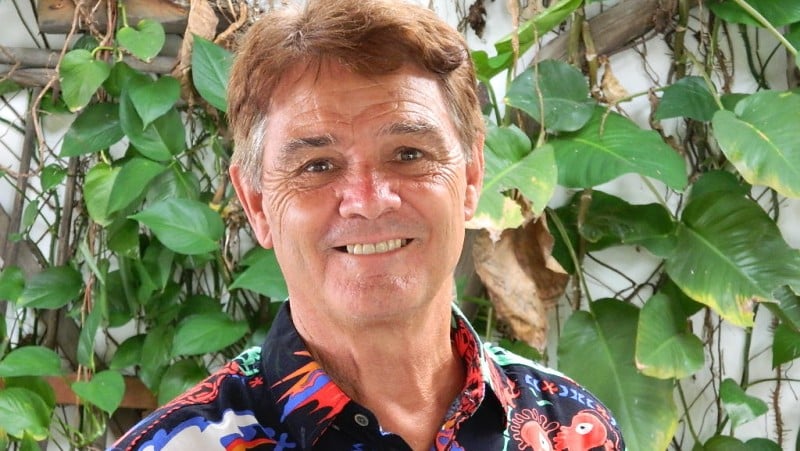 “Through determination and hard work, I’ve built a great life for myself by taking advantage of opportunities. But it hasn’t always been easy.” says Ged.

Ged began his life in Middlesbrough, northeastern England, which he describes as cold, colourless and polluted by the local steel and chemical industries. But then as a young boy, his family moved to Kingston, Jamaica, where his father was posted as a construction manager.

Even though he was very young, he immediately responded to the warm weather and tropical vegetation, the surf and the welcoming seas.

“Eventually we had to return to Middlesbrough when my father’s contract was finished. I was determined to leave as soon as I finished school. As I did not plan to take the CSE or GCSE exams like a few of my fellow mates, we were escorted off the school grounds with the parting words of ‘you lot will never amount to anything; you’ll end up as drunks, unemployed or in prison’. Those words gave me the inspiration to make a productive and fun life near tropical beaches, sunshine and smiling faces,” he says.

Ged first moved to London and learned to master the culinary arts of fine dining. He figured that he could always work in the kitchens of fine resorts and cruise ships while travelling the world. He managed kitchens for a Caribbean cruise line and on European ferries as well as five-star hotels in Australia, the UK and Bermuda. He also directed kitchen operations on supply ships to Antarctica. During a life of travel and work, he’s been posted to 10 different countries including Papua New Guinea, the Philippines and the Falkland Islands.

By 2017, he decided to change course and retire from active employment. He planned to move to Thailand with his partner of nearly 50 years. But she told him that she had decided to live alone at their home in Australia. After the shock of the unexpected separation, he was determined to continue with his plan to move to Phuket to recapture his childhood memories of living in tropical comfort with smiling people.

But six weeks after he arrived on the island, he was knocked unconscious off his motorcycle by a speeding vehicle. When he regained consciousness, Ged was in an ambulance searching for a local hospital willing to accept a foreigner with adequate medical coverage. His adventures to Thailand had begun. After healing from his concussion and a broken foot, he began to write the first of four travel guides to Southeast Asia. The first, ‘The Retire-in-Thailand Handbook (the First Six Months)’, was published in late 2019.

“My first six months in Thailand were frustrating. There are numerous problems to sort through when moving to a new country and new culture including banking, organising visas, acquiring or leasing property, getting a driver’s license, finding good medical care etc. So I wrote the handbook which I wish I had before I arrived.”

He has since published more travel advice manuals for surrounding countries. All of these can be purchased through the Amazon.com website by searching for Gerald Hogg. The cost per book is less than B200 for a kindle version.

In early 2000, as the COVID virus began to spread in the region, Ged got a positive diagnosis so he decided to stay home and create his two crime suspense novels.

“My positive diagnosis for COVID came in April of last year so I had to self-isolate. It occurred to me to write a book of adventure using COVID as a main theme. In ‘Thai Died… Murder in Paradise’, I introduce Police Lieutenant Chai Son Sinuan who will be featured in this ongoing series. I have just released the second in the series, ‘Thai Died… Bar Girl’.”

Ged’s ambition for his life has been to travel and live in the most beautiful countries around the world. Now retired in Thailand, he believes his dream has come true.

Why you need reading glasses after the age of 50 and how to solve it
‘Top Gun: Maverick’: Big action, for the big screen
Soapbox Satire: Let’s lose the riff-raff
The Sunday Seaview Brunch at Pine Beach Bar
Nic Cage and ‘The Unbearable Weight of Massive Talent’
Soi Dog Foundation calls for tougher enforcement of dog and cat breeding welfare laws
Krabi x Phang Nga travel challenge.
Pandemic, or Endemic Epidemic? It’s all Academic!
Sustainably Yours: Make money and be more sustainable
When Sharks Attack: Three easy steps to survive and thrive in the ocean
One Phuket Sustainability Fair and Lean On Me Live Fest 2
On Campus: Welcome to the Google Meet?
Everything Everywhere All at Once ‒ or not
Phuket Music Scene: The Ozone Band – a real breath of fresh air
Phuket marks National Tree Day