The yacht dropped anchor in Patok Bay, on the northwest side of Racha Yai Island. Photo: DMCR 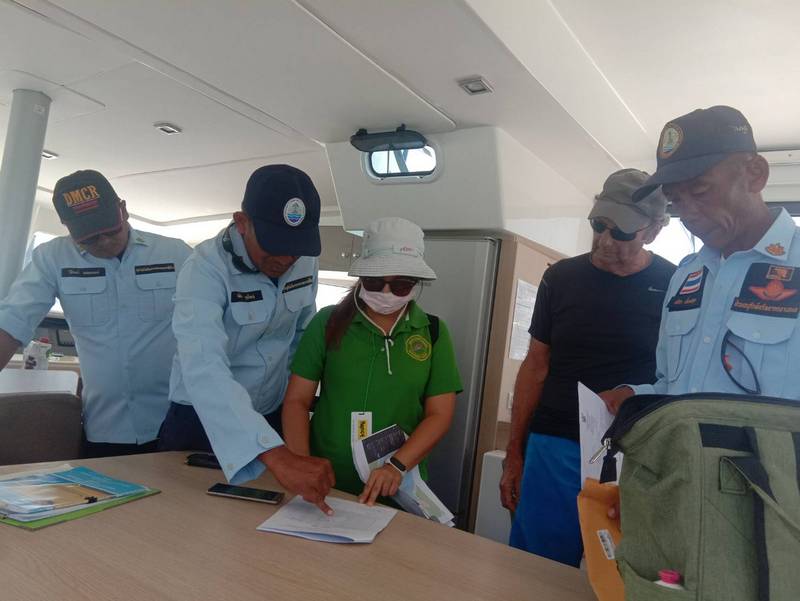 Somnuek Boonyai, Chief of the Department of Marine and Coastal Resources (DMCR) Region 6 office’s Preservation of Marine Life Section, told The Phuket News that he was notified by a member of Marine Rangers (see here) last Friday (Mar 6) that a yacht named “Cotinga” had dropped anchor anchor in a protected coral area, causing damage to corals.

DMCR officers filed a complaint with the Chalong Police and contacted Dream Yacht Charter (Thailand) Co Ltd, which had chartered the yacht out to Jean Girard, 67, from France.

Mr Girard confirmed that he had rented the yacht on that day to have a trip with his family, Mr Somnuek said.

One charge is to breach of a regulation introduced by the DMCR under Section 17 of the Act on the Promotion of Marine and Coastal Resources Management B.E. 2558 (2015), which can incur a penalty of up to one year in prison or a fine of up to B100,000, or both.

The second charge is for breach of Section 12 of the Wildlife Preservation and Protection Act 2019, which can incur a penalty of up to 10 years in prison or a fine of up to B1 million, or both.

Asked how much Mr Girard will be fined, Mr Somnuek explained yesterday (Mar 11), “At this stage, police have not yet fined him as they are still waiting for a report confirming how much damage was done to the corals.”

Mr Somnuek confirmed that the yacht charter company will not face any charges.

The protected area where the corals were damaged are located at Patok Bay, the northwest side of Racha Yai Island, Mr Somnuek explained.

“The reef there is a designated protected area. Boats are allowed to pass through the area, but not allowed to drop anchor there,” he said.

There is a sign on the beach to explain about the protected coral area, but there are no buoys on the water to indicate where the protected zone is, Mr Somnuek confirmed.

Asked whether the area will be marked on the water as a protected zone, Mr Somnuek said, “Having signs out there is not sustainable, they can be damaged easily by the wind and waves. However, I will find a good solution later.”