PHUKET: Three people have died in a motorbike collision in Rawai early this morning (Mar 19), including a 48-year-old French expat and a Thai woman who was five months pregnant, police have reported. 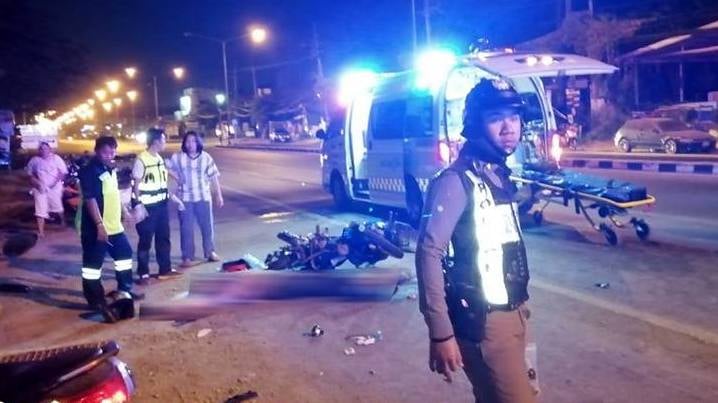 Rawai Municipality rescue workers and Chalong Police were called to the scene of the accident, opposite of the Rawai Health Center on Wiset Rd (see map below), at 1:05am.

At the scene officers found two wrecked motorbikes, one a white Ducati and the other a Honda Wave.

One of the people killed was a 48-year-old Frenchman, reported Capt Somkiet Sarasin of the Chalong Police, who declined to name any of the people involved in the accident.

The Frenchman was the person riding the Ducati motorbike, Capt Somkiet said.

Capt Somkiet identified the Frenchman by his Thai driver’s licence, which was issued two years ago. “I have already informed French consular officials of his death,” he noted.

The other fatality was a Thai woman who was riding as a passenger on the Honda Wave. “She was five months pregnant,” Capt Somkiet confirmed.

Of the two people who suffered critical injuries in the accident, one was a Thai man who was driving the Honda Wave.

“He was unconscious with critical injuries and was taken to Dibuk Hospital, but later transferred to Vachira Hospital (in Phuket Town),” Capt Somkiet said.

“Today I was informed that he had died from his injuries.”

The other person heavily injured was a Thai woman who was a passenger on the Ducati with the French expat.

“She has critical injuries, and was taken to Vachira Phuket Hospital,” Capt Somkiet said.

“At this stage we are not even sure exactly how the accident happened,” Capt Somkiet admitted.

“We are still continuing our investigation into that,” he said.

However, he added, “Blood tests are being carried out on all four people who were involved in the accident to determine if alcohol was a factor.

“Also, what we can confirm is that no helmets were found at the scene. Other than that, all other details we are still investigating,” Capt Somkiet said.