Four arrested, one on the run after B30m heist

Four arrested, one on the run after B30m heist

UPDATE: Four foreigners suspected of being involved in yesterday’s (May 14) B30 million jewellery robbery are on their way back to Phuket for questioning, while a fifth remains on the run after fleeing from custody. 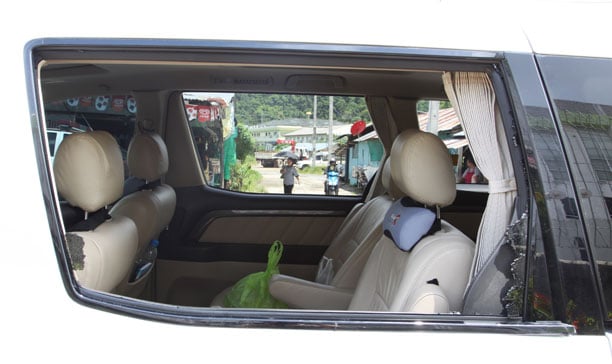 The car that thieves allegedly broke into.

The four suspects currently being detained – a Russian, a Turk, a Spaniard and a Malaysian – were arrested in Trang province while allegedly preparing to flee the country.

The fifth suspect, a Malaysian woman, was also arrested but apparently escaped while making a toilet stop.

The suspects were incorrectly reported earlier as being three Canadians.

PHUKET: Police have arrested three foreigners suspected of stealing B30 million worth of jewellery this morning.

Police said the suspects had driven out of Phuket after the brazen robbery, heading to Trang province where they were apparently preparing to flee from Thailand to Malaysia.

The three were reportedly arrested while still in possession of the jewellery.

Police are tonight transferring the suspects back to Phuket to face questioning, and are expected to release more details at a press conference tomorrow.

The three are suspected of smashing a car window this morning (May 14) and stealing a suitcase full of jewellery worth B30 million.

The incident took place on Soi Bang Yai, behind the Big C department store near Central Festival in Phuket Town.

The owner of the jewellery, Thongsak Jittakarnlert, 47, reported to police that his car was being followed by a white Vios last night (May 13), after he left a jewellery fair at Central Festival.

The stolen jewellery, made from gold, diamonds and other precious gems, was transported from Bangkok to be displayed at the fair, which began on May 10.

Mr Thongsak said that before the robbery he parked his car in front of a small local restaurant, just 100 meteres from his hotel, Baan Suan Place, while he had breakfast.

The thieves, believed to be a male and two females, took this opportunity to break the car’s window and take the jewellery, police said.

Camera footage from a different angle showed the same foreign man walking into the hotel with another female foreigner. The three were not staying at the hotel, staff confirmed.