PHUKET: Police have arrested a 29-year-old former bank employee in Chalong for setting up his own online access to a bank customer’s account and siphoning off more than B100,000 to pay for online games. 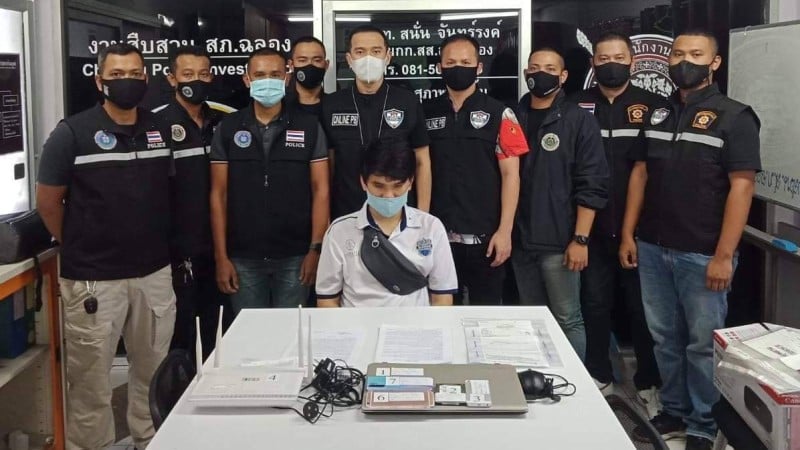 Parin was wanted under an arrest warrant issued by the Phuket Provincial Court on Monday for three offences: fraud, unauthorised access to a computer system and entering false information into a computer system which is likely to cause damage to another person.

Seized as evidence in placing Parin under arrest was one laptop computer, three mobile phones, one WiFi internet router and one hard drive.

Parin was a former bank employee in Phuket who had just resigned less than a month ago, Lt Col Thapakorn explained.

Lt Col Thapakorn did not name which bank Parin worked for.

Parin had taken personal information of a customer, a pig farmer about 60 years old, and used it to access the farmer’s account via the bank’s “Net Bank” platform.

“He transfered money from the victim’s account to pay for online games,” Lt Col Thapakorn explained.

More than B100,000 had been transferred from the victim’s account, he said.

Parin had used personal information of the farmer, such as his bank account number, ID card and mobile phone number, to set up the online access to the account, which the farmer had no idea had been created, Lt Col Thapakorn explained.

“The victim did not realise that the money in his account had been smuggled away. The villain used the money from the victim’s account to buy products from digital content service providers in order to make it difficult to verify their financial routes,” he said.

In total, Parin had transferred money from the account 14 times, he added.

After Parin’s arrest, he was taken to Chalong Police Station for processing, Lt Col Thapakorn noted.

Police are expanding their investigation to determine whether there are other victims, he added.

The arrest was a collaboration of police working with bank investigators to track down Parin, Lt Col Thapakorn said.

“The police are ready to cooperate with various service banks in taking care of the property of all service users,” he said.

Lt Col Thapakorn urged people to be careful with disclosing their personal information.

“Be careful not to disclose your personal information, and financial information, to other people and conduct regular checks of your information security to make sure you do not leave a loophole for criminals to exploit,” he said.

“Any persons who believe they are victims of crimes against their property or personal information via an electronic system can contact the Information Technology Crime Suppression Center, located on 1st Floor at Royal Thai Police Building 1 [in Bangkok], or call their hotline 1599 or 1155,” Lt Col Thapakorn said.