PHUKET: MaAnn Samran, Chief of the Cherng Talay Tambon Administration (OrBorTor), today told The Phuket News that he will dispatch officers to inspect the deluge of plastic waste that has smothered large areas of Layan and Leypang beaches and organise a mass clean-up operation.

natural-resourcespollutionenvironment
By The Phuket News 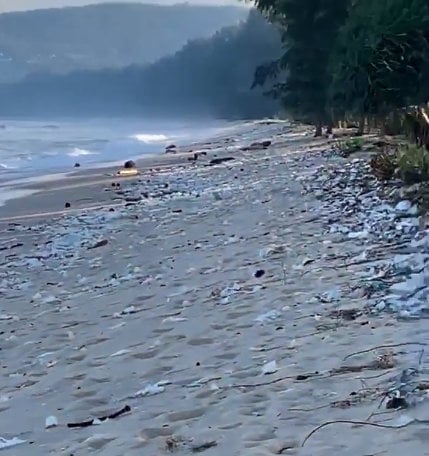 The plastic waste has even been pushed up onto the areas behind the beach. Image: Supplied The deluge of trash was pushed ashore by the southwest monsoon over the weekend, and appears to stretch kilometres along the beach, from Layan Beach through Laypang Beach on Bang Tao Bay on Phuket’s central west coast.

After receiving images of the trash covering huge areas of the beach, Mr MaAnn said that he was surprised to see so much debris along the sands.

No one else had told him about the state of the beach today, he added.

“Usually when officers are told about trash on the beach, we send officers to investigate. Let me speak with our officers about this,” he said.

“I will not be able to inspect this myself until Wednesday, but in the meantime our officers will look into cleaning it up,” he added.

“At this stage I have no idea what the details of any clean-up will be, but we will let people know as soon as it is organised,” Mr MaAnn said.

“The amount of plastic waste on Laypang/Layan beach is incredible. Also behind the beach where storms have blown it,” the reader wrote in an email.

“I assumed it was all from Thailand, but looking closely it is clear 95% of it is from Malaysia and Indonesia as some labels do survive,” he added.