PHUKET: The first survivors of the boats struck by the storm earlier today have been brought ashore, Phuket Governor Norraphat Plodthong announced at an emergency meeting tonight (July 5).

tourismweatheraccidentsChinesemarineSafetyRussian
By The Phuket News 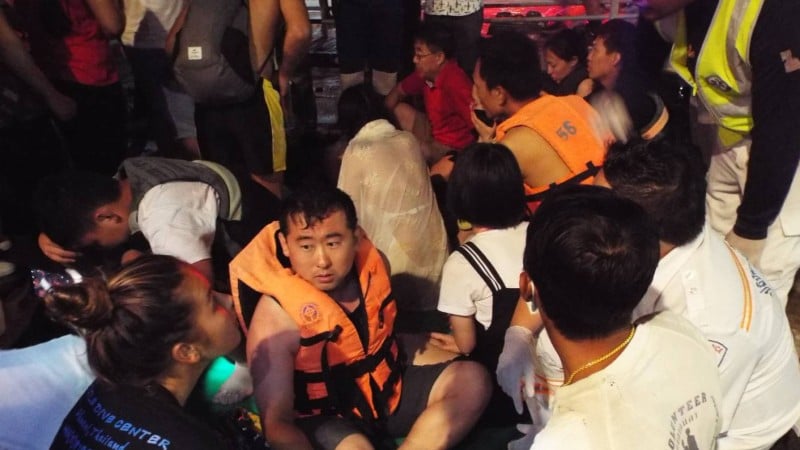 The first survivors from the boat sinkings earlier today have been brought ashore. Photo: Eakkapop Thongtub

UPDATE: The Phuket News has been informed that rescue teams have recovered the body of one Chinese man, age presumed to be 35-40, which is en route back to Phuket to be brought ashore at Chalong PIer.

At 10:40pm tonight an updated report from Governor Norraphat Plodthong  gave the number of people sought from the Phoenix at the time the boat sank as 105: comprising 93 tourists and  12 guides. The number of crew was not mentioned. The updated report said that 51 people from the Phoenix had been recovered, along with one body - leaving the search for 53 survivors remaining. The search has been suspended for the night, and will resume at 6:30am tomorrow (July 6).

Governor Norraphat reported a total of 138 people in need of rescue from three incidents on the sea today:

So far 89 of the 138 people sought have been recovered, Gov Norraphat reported.

From Ficnic, 48 were taken to Phuket Provincial Hospital in Rassada, with one survivor in critical "red" condition and nine others in "yellow" condition -- leaving 49 still missing.

All 39 people from Senalika had been safely recovered, and the two Russians in the jet-ski incident were both already safe, he said.

Meanwhile, the search for more survivors goes on.

As a precaution Governor Norraphat ordered all boats not to leave port during the night, leaving 10 boats with 263 registered passengers safely stranded at Koh Racha overnight.

Of note, the official report of the emergency meeting tonight did not mention the word tourists or their nationality, which at this stage is presumed to be Chinese.

** * Later confirmed by the actual name painted on the hull as the "Serenata".