THAILAND: The first group of Chinese visitors since the COVID-19 outbreak forced the closure of Thailand’s borders in March arrived at Suvarnabhumi airport from Shanghai yesterday (Oct 20), according to the Tourism Authority of Thailand (TAT). 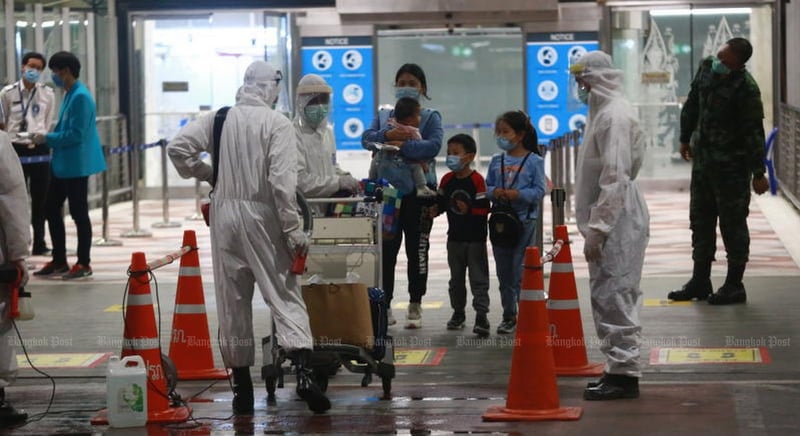 Chinese tourists on the new special tourist visas arrive at Suvarnabhumi airport from Shanghai last night (Oct 20). They will be put in quarantine for 14 days before they can go out and about. Photo: Somchai Poomlard.

The 41* Chinese visitors on a Special Tourist Visa (STV) - which was recently approved by the cabinet to restart the country’s pandemic-battered tourism industry - arrived on a special Spring Airlines flight at 5:10pm yesterday, TAT governor Yuthasak Supasorn said.

Mr Yuthasak said the tourists have entered the 14-day mandatory quarantine in Bangkok. “Most of them planned to visit the beach and they already reserved hotel rooms,” he said.

Upon arriving, the tourists were required to download a tracking app on their smartphones. The STV allows them to remain in the kingdom for up to 90 days, and is renewable twice.

Mr Yuthasak said more Chinese visitors are on their way, with 147 due to arrive at Suvarnabhumi airport from Guangzhou on Oct 26. TAT estimated that each tourist would spend around B800,000 during their stay in Thailand.

A group of 120 visitors from Guangzhou were supposed to arrive in Phuket on Oct 8, but their trip was postponed as the island’s authorities were concerned they might not have the manpower to deal with the tourists’ arrival, which coincided with Phuket’s annual vegetarian festival, according to the Sports and Tourism Ministry.

Meanwhile, Thai Airways International (THAI) announced it will fly 120 Chinese visitors with STVs to Thailand on Oct 28, the airline announced.

The special flight will pick up tourists from Shanghai, along with individuals of various nationalities with a medical visa, as well as Thais returning home from China, said Wiwat Piyawiroj, THAI’s executive vice president for commercial operations.

The flight will depart Shanghai at 5:20pm on Oct 28 and arrive in Bangkok at 9:15pm on the same day.

The TAT governor said the return of foreign visitors signalled a recovery, which has been made possible by a raft of tourism-related incentives.

*this figure was later confirmed as 39 by official sources