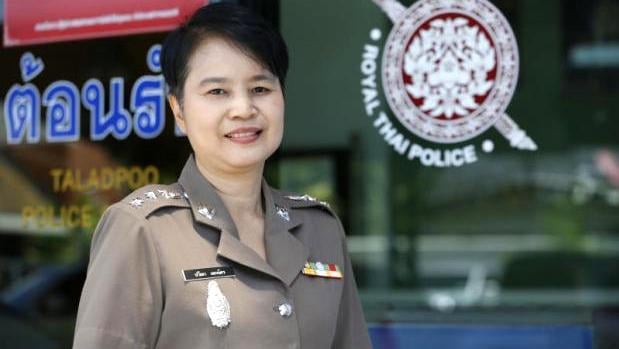 As a girl, she always wanted to be a nurse and realised that dream at Police General Hospital. However, after working on the wards for two years, Pol Col Pawina decided to switch careers and took up a role with the police force.

“I’d met so many police officers during my time nursing that I thought I might be good at the job and enjoy the life,” she said.

Now, thirty years later at the age of 50, Pol Col Pawina has been promoted to acting superintendent of Talat Phlu police station in Bangkok, where she will supervise an area of 2.7 square kilometres on the west bank of the Chao Phraya River.

Even though the position is technically temporary for now, Pol Col Pawina’s promotion made headlines and caught the attention of the public.

It is the first time a female police officer has taken the top job at a rong phak – the informal name for a police station.

Her rise to power marks a welcome change of direction for the male-dominated RTP, and also brings hopes of a more sensitive approach to the management of complex criminal cases.

As Pol Col Pawina says herself: “Policemen are more reliable in jobs that need physical exertion. But women are more understanding of people’s feelings, especially women and children.

“I think my style will be an asset in complicated cases involving a wide cast of characters,” Pol Col Pawina told the Bangkok Post.

Long-term RTP studies have highlighted the benefits of reforming what has often been seen as “an old boys’ club” and opening up the higher echelons of the force to women.

Her superior, Pol Maj Gen Samrit Tongtao, picked Pol Col Pawina, after demoting Pol Col Banyong, along with his two deputies and two police inspectors, following a raid on an illegal pub in their area.

There are 38 suspects in this case and all of them teenagers. “We need a female superintendent to complete the investigation and Pol Col Pawina is the right person to handle it,” Pol Maj Gen Samrit, chief of Metropolitan Police Division 8, said.

“At first, I didn’t think my boss would trust me enough to appoint me to be in charge of a rong phak,” Pol Col Pawina said.

“Many police officers dream of being a chief, so I thought ‘why shouldn’t I give it a go?’ It’s quite literally a once in a lifetime experience,” she said with a smile.

“Pol Lt Gen Sanit has given me a lot of encouragement and told me to view this as an opportunity to prove myself,” she said.

Pol Lt Gen Sanit has been adamant that equal rights between female and male police should be a priority for the force and has often championed the knowledge and capabilities of policewomen under his command.

However, Pol Col Pawina was not promoted to chief of Somdet Chao Phraya police station as planned and her two colleagues also did not get jobs at Makkasan and Phahonyothin police stations. Their promotions appear to have been stalled due to a failure to get a final sign-off on the moves. Many have speculated that this was a result of the force’s highly conservative nature, something that Pol Col Pawina hopes to challenge through her performance on the job.

Indeed, colleagues interviewed by the Bangkok Post have nothing but praise for Pol Col Pawina’s ability having worked with her closely for three decades now.

She started her police career handling cases involving women, teenagers and families at Rat Burana station, before being promoted to lead a team of inquiry officers at Somdet Chao Phraya station.

She has gradually sharpened her skills over the years to reach a point where many now regard her as one of the city’s top police officers.

Looking back at the path she has taken in life, Pol Col Pawina admits she could never have imagined herself as a renowned police officer, especially having begun her career as a nurse.

“But I’ve never forgotten the knowledge and skills I picked up during my time as a nurse,” Pol Col Pawina said.

In fact, she believes some of the things she learnt in her previous role have been invaluable to her police work.

She has an understanding of medical test results that many of her colleagues do not share, making her an asset to the force during investigations into violent crimes.

And she was also given specific training in how to deal with traumatised individuals, families in particular.

“This skill is particularly useful during interrogations where I need to find out key details from the victims of serious crimes,” she said.

Pol Col Pawina says her detail-oriented nature helps her coordinate with state agencies, and also keep on top of difficult cases, which is why she feels ready for the challenge of supervising Talat Phlu station.

Besides the case involving underage revellers, other common problems in the area are drugs and robberies, but the numbers are usually low.

She admits that she wonders what criminals will make of her appointment. “It’s possible some gangsters may want to challenge me,” she laughed.

However, she did not foresee any resistance from male police.

“Police are trained to follow rules and orders,” she said.

“Every police officer at the RTF has his and her own duty and rules to follow, and we’re all trained to respect the chain of command.”