PHUKET: Police are now searching for a man who solicited alms from the public while dressed as a monk at a main fresh market in the heart of Phuket Town, then stripping naked in a field nearby to change into layman’s clothes before leaving the area. The man in monk’s robes begins to undress in the field opposite the main post office in Phuket Town. Screengrab: via ภูเก็ตแชร์สนั่น (Phuket Share Sanan) The man in monk’s robes begins undresses in the field opposite the main post office in Phuket Town: Screengrab: via ภูเก็ตแชร์สนั่น (Phuket Share Sanan) 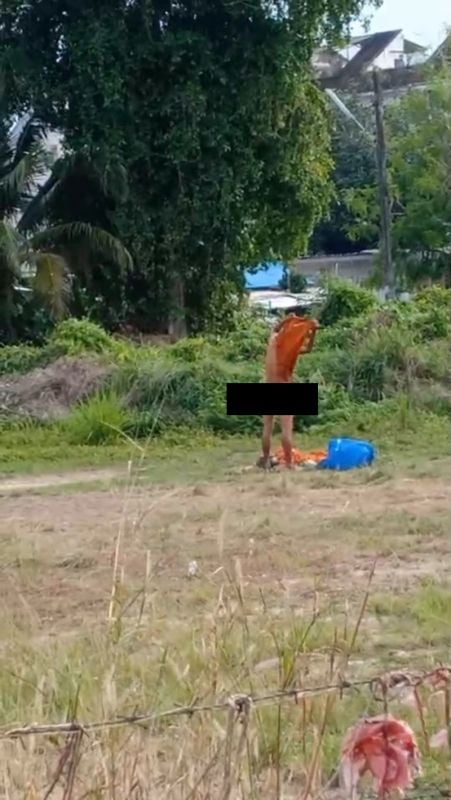 The man dressed in layman’s clothes before leaving the area. Screengrab: via ภูเก็ตแชร์สนั่น (Phuket Share Sanan) The man was reported to be soliciting donations from people at the  Phuket Town Fresh Market 2 on Ong Sim Phai Rd in Phuket Town.

Phuket Provincial Police Chief Col Sarawut Chuprasit said that he had tasked officers with investigating the fake monk after receiving complaints from the public, including videos showing the man getting changed in the field across the road from the main Phuket Town Post Office on Montri Rd.

“Officers have already visited the area and collected information to find details to be used as evidence for arrest and investigation,” Col Sarawut said.

“But at the moment the man has not yet been found,” he added.

Phuket Governor Narong Woonciew has reported that he is aware of the incident and has notified the senior Buddhist leaders in the area to investigate the reports immediately.