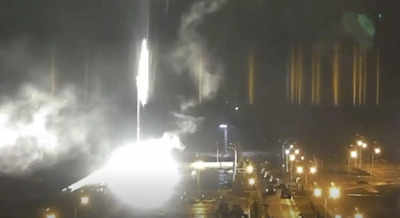 Here are some facts about the Zaporizhzhia Nuclear Power Plant, which Ukrainian authorities say was shelled by Russians.

Where is the power plant?

The plant is located in the southern Ukraine steppe on the Dnieper River, around 525 kilometres (326 miles) south of Chernobyl - the site of the 1986 disaster which left hundreds dead.

In normal times it produces one-fifth of Ukraine’s electricity and almost half the energy generated by the country’s nuclear power facilities.

Construction on the first reactor began in 1979. The facility now has six Soviet-designed VVER-1000 reactors, the last of which was started up in 1995.

The life of each reactor is around 40-60 years - or possibly more as nuclear technologies advance.

After hours of uncertainty, the site was secured, with US officials saying its reactors are being “safely shut down”.

Zaporizhzhia’s reactors are pressurised water reactors, which are considered among the safest.

Similar reactors exist at Balakovo, located on the Volga River in southwest Russia, and at Kozloduy, which is on the Danube in Bulgaria.

The initial design was developed from a nuclear submarine reactor and is very different to the graphite-moderated reactor at Chernobyl.

They work by the core heating steam, but unlike other reactors the nuclear-contaminated steam is not used to generate energy.

Instead, it is used to power another uncontaminated steam circuit which then turns the turbines.

This means that radiation levels for workers at the plant are relatively low.

Background radiation levels around the plant are currently around 0.1 microsieverts per hour, according to the plant’s operator.

That is below the global average of background radiation and much less than flying on an airplane or getting an x-ray.

During the Chernobyl disaster radiation levels were around 300 sieverts per hour, many millions of times higher.

After Russia’s military action against Ukraine in 2014, Kyiv developed new safety protocols for the physical protection of nuclear facilities across the country - including regular inspections, vulnerability assessments and implementing automated data control systems.

The air defence system over Zaporizhzhia was also strengthened.

By 6:20 am local time today, the fire was extinguished, local emergency services in Ukraine said, confirming that there were no victims.

But the brief blaze had a strong immediate reaction.

British Prime Minister Boris Johnson accused Russian President Vladimir Putin of “reckless actions (which) could now threaten the safety of all of Europe”, and called for an emergency UN Security Council meeting.

“If there is an explosion, it is the end of everything. The end of Europe,” he said.