FOOTBALL: Euro 2020 enters the quarter-finals stage later today (July 2) with the mouth-watering tie between hotly tipped favourites Italy and Belgium the pick of the round. 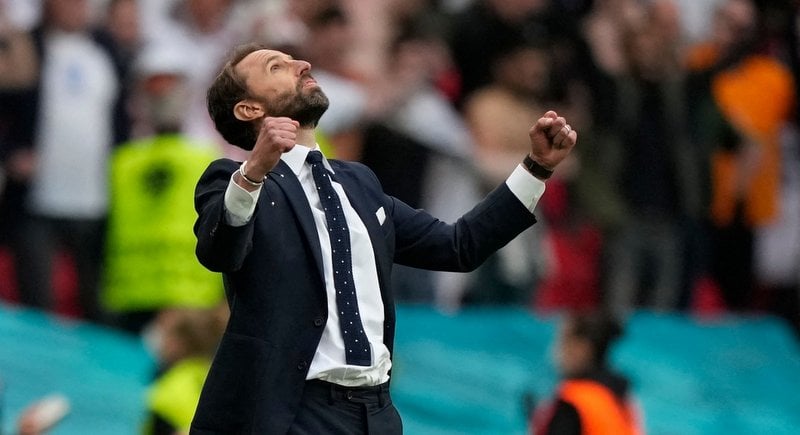 England manager Gareth Southgate’s game plan against Germany in their last 16 knockout game has been hailed as a masterclass by many. Photo: AFP

Like a fine wine, the tournament is maturing with age after the last 16 knockout round played earlier this week saw some spectacular games, results and upsets.

Italy vs Belgium (kick off 2am Saturday, July 3, Phuket time).

Italy were made to work hard for their win against Austria last Saturday (June 26), the first time the Azzurri have been truly tested in the competition thus far.

They required extra-time at Wembley and were indebted to goals from substitutes Federico Chiesa and Matteo Pessina to secure the 2-1 win.

Portugal arguably had the better chances although Belgium’s three-man backline of Jan Vertonghen, Toby Alderweireld and Thomas Vermaelen, with a combined age of 101 years and 224 internationals caps between them, held firm to protect the lead.

However, injuries sustained by star men Eden Hazard and Kevin de Bruyne means both could miss out against the Italians which will be a huge blow to their chances of progressing.

Last Monday has been dubbed “Manic Monday” after some of the finest international tournament football ever witnessed.

The day of high drama started with Spain edging past Croatia 5-3 after extra time in a compelling game.

Spain fell behind to a freak 50-yard own goal by Pedri, as goalkeeper Simon Unai carelessly took his eye off the ball which proceeded to roll into the net. It was an awful gaffe and the ninth own goal of the tournament so far, which is more than have been registered in all the previous Euros combined. "Own goal” looks certain to claim the competition’s golden boot award for most goals scored unless any of the Czech Republic’s Patrick Schick (4), Belgium’s Romelu Lukaku (3) or England’s Raheem Sterling (3) can add to their existing tallies!

The later game last Monday was a pulsating affair as Switzerland caused a seismic shock by dumping out reigning World Champions France.

The Swiss found themselves 1-3 down with 10 minutes to go but managed to fight back with an inury time equaliser to take the game into extra time and then a penalty shootout which they won 5-4. Kylian Mbappe missed the vital spot kick for the French.

Spain start the quarter final as favourites in St Petersburg, especially as the Swiss must do without the services of captain Granit Xhaka who picked up a second yellow card of the tournament against the French and misses the match.

Denmark go up against the Czech Republic tomorrow in a match many are referring to as the game between the tournament’s dark horses.

The Danes eased past Wales in a 4-0 triumph last Saturday and continue the fine momentum they have found since the harrowing experience in their first game against Finland when star player Christian Eriksen suffered a cardiac arrest and collapsed on the pitch.

The Czechs impressed as they saw off the much-fancied Netherlands last Sunday. The Oranje had defender Matthijs de Ligt sent off for a VAR-reviewed handball offence just after halftime and subsequently capitulated as the sprightly and decisive Czechs took control, with goals from Tomas Holes and Patrik Schick securing the 2-0 win.

Schick will be looking to equal current tournament top-scorer Cristiano Ronaldo in his bid to win the golden boot award.

England vs Ukraine (kick off 2am Sunday, July 4, Phuket time)

The Three Lions managed to do something last Tuesday they had not done since the golden year of 1966 by beating arch-rivals Germany in a knockout tournament game.

In an eventful game England progressed thanks to goals from Raheem Sterling and captain Harry Kane.

The team selection by manager Gareth Southgate had been criticsed by many prior to kick off for being too defensive but his tactical nous proved effective as England stifled the Germans and edged the game. Many observers classed Southgate’s game plan as a masterclass after the match.

England have still not conceeded a goal in the tournament, the only team to do so. Conversely, they have only scored four goals in their four games thus far, suggesting Southgate may need to ease the handbrake and unleash some of the exciting attacking talent at his disposal such as Jack Grealish, Phil Foden, Jadon Sancho and Marcus Rashford.

There was drama in the game between Ukraine and Sweden as the former scored their winner in injury time of extra time to record a 2-1 win and set up the quarter final date against England in Rome.

England start as favourites although both teams are full of confidence meaning nothing is certain.

What is certain is all four games promise to offer football fans the world over some pulsating action so miss them at your peril!